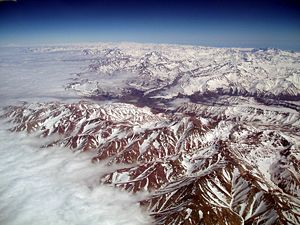 South America is attached to Central America at the boundary of Panama.[3] Geographically[4] all of Panama – including the part east of the Panama Canal in the isthmus – is usually included in North America alone,[5][6][7] among the countries of Central America.[8][9]

The soil in Argentina's Pampas is among the best in the world. Brazil's soil is very good for growing coffee.[3] A great number of minerals have been found. Few, however, have been mined.[3] Among those that were mined are iron, manganese, gold, and gemstones.[3] The tropical forests are rich in valuable trees, like mahogany, ebony, and rubber.[3] Oil is also a resource in some places.[3]

South America is home to a large variety of animal life. These include animals such as jaguars, macaws, monkeys, anacondas, llamas, piranhas, toucans, tapirs, cougars, condors and chinchillas.

The most popular attractions are:

The amazon rain forest is a moist grassy land where many wild animals live and contains the amazon river which is the 2nd longest river in the world and and has the largest volume of water.The world's longest river is the Nile in Africa. The forest is known as a rain forest as it rains very often but due to the dense surroundings not every droplet reaches the bottom. The Amazon is shared by eight countries (Brazil, Bolivia, Peru, Ecuador, Colombia, Venezuela, Guyana and Suriname) and stretches for 6.7 million kilometers2. In the amazon rain forest, hundreds of thousands of trees have been cut down for wood and paper,meaning that the forest is endangered. Unlike the Boreial forest in Canada the trees are not getting replanted.