Uruguay (officially Oriental Republic of Uruguay) is a country in South America. The language spoken there is Spanish. Its capital and largest city is Montevideo. Uruguay is bordered by two large neighbors, Brazil and Argentina. The only country in South America that is smaller than Uruguay is Suriname. The land is mostly flat, and there are many farms in the countryside.

The area around Uruguay was fought over by the Portuguese and Spanish Empires in the 18th century. In the 1810s it was the center of a Federal League of states in the Río de la Plata region. Argentina and Brazil took the majority in wars, leaving Uruguay as independent. 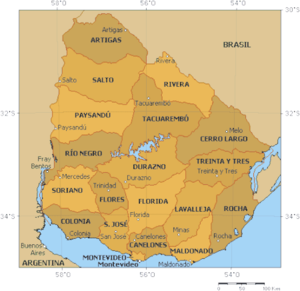 Uruguay is divided into 19 different Departments.

The highest point in the country is the Cerro Catedral whose peak reaches to 514 metres (1,686 ft).

There are nine National Parks in Uruguay. Five in the wetland areas of the east, three in the central hill country and one in the west along the Rio Uruguay. 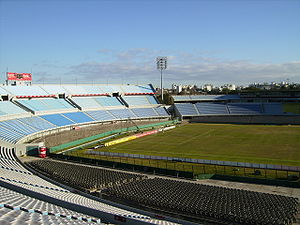 Football is the most popular sport in Uruguay. The Uruguay national football team has won the FIFA World Cup on two occasions.