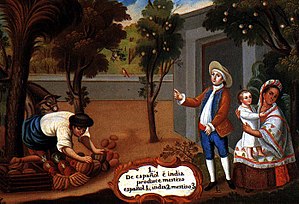 Mestizo (meh-STEE-tzo) is a Spanish term for a person who is of mixed European (usually Spanish) and Indigenous ancestry.

Indo-Mestizo (also known as Cholo) is a Spanish term for a person who is around 3/4 Native American and 1/4 Caucasian ancestry.

Indo-Mestizos are mostly found in Eastern and Southern Mexico, much of Northern Central America, Ecuador,south of Peru, and Bolivia

Famous Indo-Mestizos include Maya Zapata, George Lopez, and Danny Trejo. They are so called because of their appearance, not because of known genetic background.