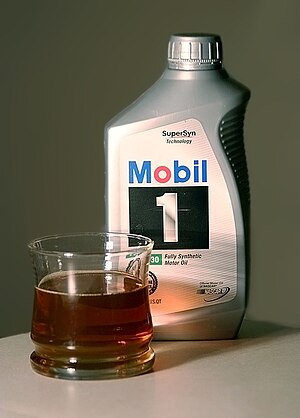 The word oil is used for many different kinds of liquids. Oil usually does not mix with water.

Vegetable oils are made from plants. Many are used in foods and for cooking. Some kinds of plant oils that people use are palm oil, maize (corn), olive, peanut, soy, and sunflower.

Other kinds of oil are made from crude oil (petroleum) which comes from under the ground. People use large oil wells to bring the oil up to the surface. The oil is sent in special ships called tankers or in pipelines to factories called refineries where it is distilled into LPG, gasoline (petrol), diesel fuel, and fuel oil. Plastics are among the Petrochemicals made from crude oil or natural gas. Oils from crude oil are also used as fuels for engines or as lubricants to make the parts of machines work together without sticking or stopping.

Different kinds of oils are also used for many other things, for example to make cosmetics, medicines, paints, and detergents, like washing up liquids. Soap(s) are similar to detergents, but they are generally made from animal fat(s) rather than oils.

Oil is also made for various purposes including synthetic fuel and lubricant.