KidzSearch Safe Wikipedia for Kids.
Jump to: navigation, search
This page is about the liquid fuel and industrial solvent. For the methane gas fuel, see Natural gas. 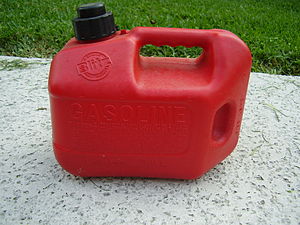 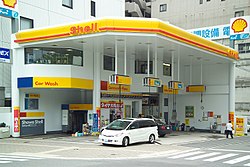 A gasoline station in Hiroshima, Japan

Gasoline /ˈɡæsəliːn/, or petrol /ˈpɛtrəl/, is a toxic, clear liquid that is mostly used as a fuel in internal combustion engines. It is made by boiling petroleum, a fossil fuel. In a distillation process, petroleum is heated to a very high temperature, then it separates into its components, one of them is gasoline. This is an expensive process. It is made mostly of octane (C8H18), a hydrocarbon.

Gasoline is most often used in vehicles like cars, vans, etc. Gasoline can be used in a wide variety of other things that we use every day, such as lawnmowers, leaf blowers, and small boat motors. Some larger vehicles like trucks or ships may use diesel fuel instead of gasoline.

Gasoline is very dangerous. It can explode when an electric spark lights it. It is also harmful if a human drinks it or if it gets on the skin. It hurts the environment and human health by creating poisonous gases such as carbon monoxide. If a gasoline engine is used indoors or in a closed space, the carbon monoxide can cause death in minutes. Many people die every year from using gasoline-powered generators indoors, or leaving vehicles running inside a garage.

Unlike the US, countries in Europe impose substantial taxes on fuels such as gasoline. For example, price for gasoline in Europe is more than twice that in the US.

Most consumer goods have posted prices that exclude tax; taxes are added based on a percentage of the purchase price. Because of primitive gasoline pumps in the 1920s, United States gasoline prices are posted with taxes included and the taxes are set on cents per gallon. Taxes are added by federal, state and local governments. (These taxes collect the cost of maintaining the roads.) As of 2009, the federal tax is 18.4¢ per gallon for gasoline and 24.4¢ per gallon for diesel (excluding red diesel).[10] Among states, the highest gasoline tax rates, as of January 2011, are California (47.7¢/gal), New York (47.3¢/gal), Hawaii (45.8¢/gal), and Connecticut (45.2¢/gal).[11] The federal government and many states fail to increase their gasoline taxes over time with inflation. However, some states[Note 1] also charge a sales tax as a percentage and vary in amount depending on the cost of the gasoline.

About 9% of all gasoline sold in the US in May 2009 was premium grade, according to the Energy Information Administration. Some car manufacturers "recommend" premium gasoline but have computer-controlled engines that adjust the timing to avoid knocking. So, most cars can burn regular grade gasoline but at a slightly reduced performance.[12] The Associated Press said premium gas–which is a higher octane and costs several cents a gallon more than regular unleaded–should be used only if the manufacturer says it is “required”.[13]

To reduce the use of imported oil, the US uses Gasohol (10% ethanol) and E85 (85% ethanol) ethanol/gasoline mixtures.

Brazil has the largest national fuel ethanol industry. Gasoline sold in Brazil contains at least 25% anhydrous ethanol. Hydrous ethanol (about 95% ethanol and 5% water) can be used as fuel in more than 90% of new cars sold in the country. Brazilian ethanol is produced from sugar cane and noted for high carbon sequestration.[14]