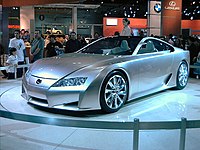 A car is a type of vehicle.

Land vehicles that are powered by an engine or motor are called motor vehicles.

Some land vehicles, like tanks and snowmobiles, have tracks. These tracks look and work like conveyor belts.

Some vehicles move on, or in, the water. Examples are boats, ships, and submarines.

Vehicles that move in the sky are called aircraft. Examples are aeroplanes and balloons.

Some vehicles, like the Space Shuttle, can even leave the Earth's orbit and go to outer space.

Vehicles can be propelled by various sources of energy.