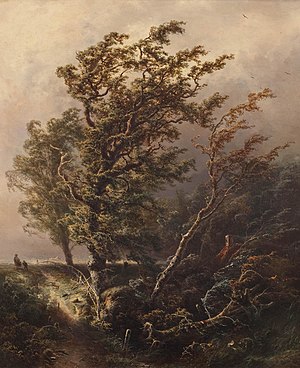 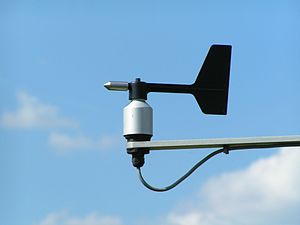 A weather vane is used to find out where the wind comes from. 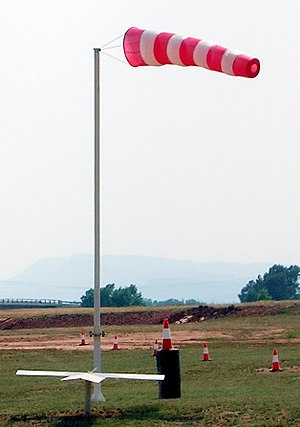 Wind socks such as this one are often used on airports. They show the direction of the wind. They can also show how strong the wind is.

Wind is the flow of gases. On Earth, wind is mostly the movement of air. In outer space, solar wind is the movement of gases or particles from the sun through space. The strongest winds seen on a planet in our solar system are on Neptune and Saturn.

Wind can move land, especially in deserts. Cold wind can sometimes have a bad effect on livestock. Wind also affects animals' food stores, their hunting and the way they protect themselves.

A High pressure area (that makes an anticyclone) near a low pressure system (that makes a cyclone), makes air move from the high pressure to the low pressure to try to even out the pressures. The Coriolis effect causes the winds to spiral around. A big difference in pressure can make high winds. In some storms, such as hurricanes, typhoons, cyclones, or tornadoes, it can cause winds faster than 200 mph (320 kilometres per hour ). This can damage houses and other buildings, and can kill people.

Wind can also be caused by the rising of hot air, or the falling of cool air. When hot air rises, it creates a low pressure underneath it, and air moves in to equalize the pressure. When cold air drops (because it is denser or heavier than warm air), it creates a high pressure, and flows out to even out the pressure with the low pressure around it.

The wind is usually invisible, but rain, dust, or snow can show how it is blowing. A weathervane can also show you where the wind is coming from. The Beaufort scale is a way to tell how strong the wind is. It is used at sea, when no land can be seen. 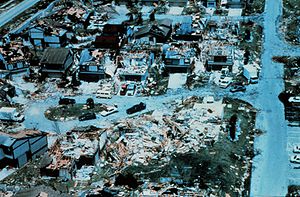 High winds can cause damage depending on how strong they are. Sometimes gusts of wind can make poorly made bridges move or be destroyed, like the Tacoma Narrows Bridge in 1940.[1] Electric power distribution can fail because of wind, even if its speed is as low as 23 knots (43 km/h). This happens when tree branches damage power lines.[2] No kind of tree can resist hurricane-force winds, but trees with roots that are not very deep can be blown over more easily. Trees such as eucalyptus, sea hibiscus, and avocado are brittle (easy to break) and are damaged more easily.[3]

The trade winds are the prevailing pattern of easterly surface winds found in the tropics, within the lower portion of the Earth's atmosphere. They occur in the lower section of the troposphere near the Earth's equator. The trade winds blow predominantly from the northeast in the Northern Hemisphere. They blow from the southeast in the Southern Hemisphere. They are stronger during the winter and when the Arctic oscillation is in its warm phase. Trade winds have been used by captains of sailing ships to cross the world's oceans for centuries. They enabled European empire expansion into the Americas. They also allowed trade routes to become established across the Atlantic and Pacific oceans. 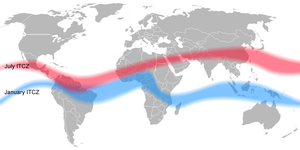 The doldrums in January (blue) and July (red).

The doldrums are in the equatorial region. It is a wind belt where air is warm, with little pressure variations. Winds are light there. Another name for doldrums is Intertropical Convergence Zone (ITCZ)

Wind in outer space, called solar wind, is very different from a wind on earth. This wind is caused by the sun, or other stars, and it is made up of particles that came out of the star's atmosphere. Like solar wind, the planetary wind is made up of light gases that have come out of planets' atmospheres.