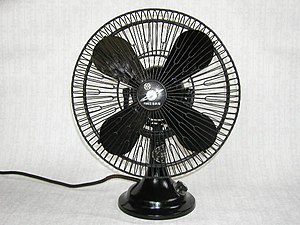 A fan is used to move air.

Air refers to the Earth's atmosphere. Air is a mixture of many gases and tiny dust particles. It is the clear gas in which living things live and breathe. It has an indefinite shape and volume. It has mass and weight, because it is matter. The weight of air creates atmospheric pressure. There is no air in outer space.

Air can be polluted by some gases (such as carbon monoxide, hydrocarbons, and nitrogen oxides), smoke, and ash. This air pollution causes various problems including smog, acid rain and global warming. It can damage people's health and the environment.

Since early times, air has been used to create technology. Ships moved with sails and windmills used the mechanical motion of air. Aircraft use propellers to move air over a wing, which allows them to fly. Pneumatics use air pressure to move things. Since the late 1900s, air power is also used to generate electricity.

Air is invisible: it cannot be seen by the eye, though a shimmering in hot air can be seen.[3]

Air is one of the four classical elements in Greek theory. It was considered an intervening element, somewhere between fire and water, and the driving force for the birth of the cosmos.

Earth's atmosphere has changed much since its formation.

At first it was mainly a hydrogen atmosphere. It has changed dramatically on several occasions—for example, the Great Oxygenation Event 2.4 billion years ago, greatly increased oxygen in the atmosphere from practically no oxygen to levels closer to present day. Humans have also contributed to significant changes in atmospheric composition through air pollution, especially since industrialisation, leading to rapid environmental change such as ozone depletion and global warming.

Outgassing from volcanism, supplemented by gases produced during the late heavy bombardment of Earth by huge asteroids, produced the next atmosphere, consisting largely of nitrogen plus carbon dioxide and inert gases.[4] 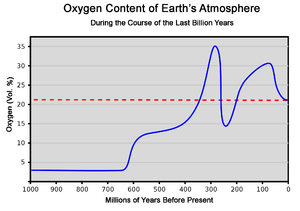 The constant re-arrangement of continents by plate tectonics influences the long-term evolution of the atmosphere. Carbon dioxide was transferred to and from large continental carbonate stores. Free oxygen did not exist in the atmosphere until about 2.4 billion years ago. The Great Oxygenation Event is shown by the end of the banded iron formations.