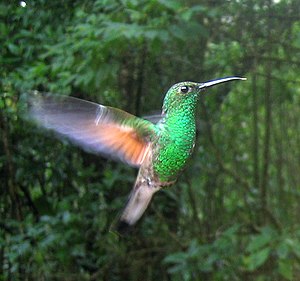 A hummingbird in flight

An airship flies up because the upward force is equal or greater than the force of gravity.

Flight or flying is a process of movement of an object in a gaseous environment or a vacuum. In practice this means it moves through the air.

All of these animals use (or used) the aerodynamic principles of flight, using the load-bearing properties of the wing for active flight. There are also many animals that glide and parachute flight, such as some spiders' webs, aeroplankton, flying clams, flying fish, and various forest-dwelling mammals and reptiles.

The fastest flying animal is the peregrine falcon. The speed of its dive is over 370 kilometres per hour (230 miles per hour).

An aerostat is a system that remains in the air by the use of floating. Man-made aerostats include balloons and airships. An aerostat's main structural component is its envelope, a lightweight skin containing a lifting gas to provide floating, to which other parts are attached. By contrast, aerodynes use aerodynamic lift, which requires the movement of the aircraft through the surrounding air mass.

There are a huge number of plants which distribute their spores or seeds by air. Many bacteria and viruses do so as well. With these very small objects, the surface area is great in proportion to its weight. That is why they lift off.