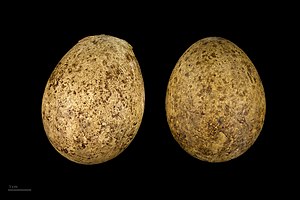 The peregrine falcon (Falco peregrinus) is a cosmopolitan bird of prey in the family Falconidae. It can also be known just as the peregrine,[2] and was once called the "Duck hawk" in North America. In Pakistan it is officially the military iconic symbol of the PAF and the unofficial territory bird of Gilgit-Baltistan.[3][4]

The peregrin is a crow-sized falcon, with a blue-grey back, barred white underparts, and a black head and "moustache". It can go at up to 322 km/h (200 mph) in a dive, which means it is the fastest animal in the world.[5][6] As with other bird-eating raptors, the female is bigger than the male.[7][8] There are 17–19 subspecies recorded, and each varies slightly in appearance and where they live. There is disagreement over whether the distinctive Barbary falcon is a subspecies of the Peregrine or just a different species.

The use of certain pesticides, especially DDT was not good for the animals. It could be shown that in areas where DDT was used, the thickness of the shells of their eggs was reduced. This caused a dramatic decline in their numbers, in certain countries. Since the use of DDT has been forbidden in many countries, their numbers are increasing again. This recovery was helped because their nesting places were protected in many countries; some countries also bred these falcons in captivity and released them into the wild.[9]