Alaska is the biggest state in the United States.[4] It is the 3rd least populated state. It has the lowest population density of all the states. About half of the population of Alaska lives in the Anchorage metropolitan area. As of the 2011 census, 722,718 people live in Alaska.[5]

The name Alaska comes from the Aleut word alaxsaq. This means "the mainland" or "the object towards which the action of the sea is directed."[7] The land is also called Alyeska, which is another Aleut word that means "the great land." The Russian name was Аляска.

Alaska mainly exports seafood, primarily salmon, cod, Pollock and crab. The oil and gas industry is very important in the Alaskan economy. More than 80% of the state's revenues is from petroleum extraction. 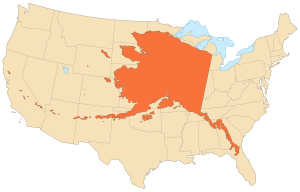 Map showing how big Alaska is compared to the other states

The capital city is Juneau, but the biggest city is Anchorage. Alaska is the biggest state in the United States, but it has one of the smallest populations. It is also the least densely populated with more than half of the population residing in the Anchorage Metropolitan Area. Alaska has almost 20% of all the land in the U.S., but only about 0.2% of the people. It is not connected to any other states by American land, but it is connected to the territories of Yukon and British Columbia in Canada.

Alaska has many glaciers, some of which are can be seen from passing cruise ships. Some are coastal, and others are not by the ocean. It is a popular tourist destination, as there is a very rich culture along with beautiful scenery. There are many wild animals in Alaska. Some of them are the brown bear, the moose, and the wolf.

There are some important industries in Alaska, like oil, fishing, mining, and forestry. Oil is the biggest industry in Alaska. Most of the oil is very far north in the Alaskan arctic. A very long pipeline starts at the northern coast of Alaska and runs to the southern coast. It is over 800 miles (1,300 km) long. There were many gold rushes in Alaska.

Many active volcanoes are found in the Aleutians in Alaska. One of the world's largest tides occur in Turnagain Arm, just south of Anchorage, where the differences in the tides can be more than 35 feet (10.7 m).[8]