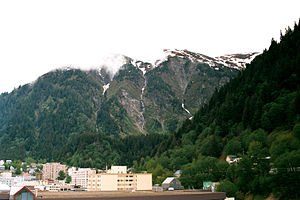 The City and Borough of Juneau is the capital city of Alaska. It has been the capital of Alaska since 1906. It is one of 2 capital cities that cannot be reached by road, the other being Honolulu, Hawaii.

The government of the then-District of Alaska was moved from Sitka by the decision of the U.S. Congress. The municipality unified in 1970 when the city of Juneau merged with the city of Douglas and the surrounding Greater Juneau Borough to form the current home rule municipality.

Juneau is named after gold prospector Joe Juneau, though the place was for a time called Rockwell and then Harrisburg (after Juneau's co-prospector, Richard Harris).

The Tlingit name of the town is Dzántik'i Héeni ("river where the flounders gather"), and Auke Bay just north of Juneau proper is called Aak'w ("little lake") in Tlingit. The Taku River, just south of Juneau, was named after the cold t'aakh wind, which occasionally blows down from the mountains.

Downtown Juneau sits at sea level, with tides averaging 16 feet (5 m), below steep mountains about 3,500 feet (1,100 m) to 4,000 feet (1,200 m) high. Atop these mountains is the Juneau Icefield, a large ice mass from which about 30 glaciers flow; two of these, the Mendenhall Glacier and the Lemon Creek Glacier, are visible from the local road system; the Mendenhall glacier has been generally retreating; its front face is declining both in width and height.

The Alaska State Capitol in downtown Juneau was originally built as the Federal and Territorial Building in 1931. Prior to statehood, it housed federal government offices, the federal courthouse and a post office. It also housed the territorial legislature and many other territorial offices, including that of the governor. Today, it is still the home of the state legislature and the offices of the governor and lieutenant governor. Other executive branch offices have largely moved elsewhere, in Juneau or elsewhere in the state, in the ongoing battle between branches for space in the building, as well as the decades-long capital move issue. Recent discussion has been focused between relocating the seat of state government outside of Juneau and building a new capitol building in Juneau. Neither position has advanced very far. The Alaska Committee, a local community advocacy group, has led efforts to thus far keep the capital in Juneau.