Before European contact, British Columbia was home to large numbers of indigenous people. These people, for the large part, still live in the province. Because BC has a large amount of resources, the native people who dwelled here lived comfortably enough. The large number of resources, in particular, led to the creation of very complex hierarchical societies in British Columbia, long before the government of the Europeans. 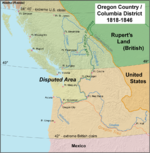 A map of the disputed region. The 54*40' parallel is visible.

The Oregon dispute was an important factor in determining the physical shape of British Columbia, and as the political impetus for British investment in protecting her lands in British Columbia. During the middle of the 19th century, the Democratic Party of the United States, appealing to the public attraction to the Manifest Destiny (a philosophy preaching American Supremacy and expansionism), declared that the United States had a claim over the entirety of Columbia District/Oregon Territory. This attitude was reflected even further, as 54*-40' or fight, referring to the end of Columbia District, and the start of Russian Territory of Alaska. This alarming attitude, caused many in London to fear that yet another war, in less than a century, was brewing. Ultimately, however, it was resolved, at the 49th parallel. British Columbia lost Fort Vancouver (now Vancouver, Washington), and lots of the gulf islands. To this day, the Oregon Treaty is criticized by historians, as being too lenient for the Americans.[2]

While British Columbia was technically a British colony, it was the private corporation, the Hudson's Bay Company that really ran the place. The first Governor of Vancouver Island (then a separate colony), actually resigned over the fact that the Queen, had no say, above the interests of the Colony. After him, the next governor of the Island, was also, coincidentally, the head of the HBC's operations in British Columbia and Vancouver Island.

The first major gold rush in British Columbia started in 1858, after gold was discovered, on the upper reaches of the Fraser River. The sudden onslaught of uncouth Americans led to the declaration that British Columbia shall be a crown colony, instead of the unincorporated region it was, after the Oregon spat. James Douglas was appointed the governor of the newly formed colony, as well as the Colony of Vancouver Island, and for military convenience, the Capital of British Columbia was declared Queensboro, then renamed New Westminster. As massive numbers of Americans came, fears that the Americans would try to bluster themselves another chunk of territory became more and more concrete. Thus, a contingent of Royal Engineers and Marines were deployed to New Westminster. To this day, the neighbourhood of Sapperton, is known, for its history as a site of the barracks for the Engineers, nicknamed the Sappers. The infrastructure ordered by James Douglas, to support the vast amount of capital flowing from the gold industry, caused high debt for British Columbia. By 1864, British Columbia was £200,000 in debt, plus an additional £18,000, from various spats with natives, and constant policing required to maintain law and order. Its vast amount of gold was useless, while BC was in debt. British Columbia amalgamated with Vancouver Island, forming one super-colony. Vancouver Island would undertake the debt, and British Columbia's capital would be in Victoria.

British Columbia at the middle of the 19th century, had 3 options: Remain a colony of Britain, annex itself to the United States, or join the Dominion of Canada. The option of remaining a colony was undesirable, for Britain had long adopted a "little Briton" policy, under which the key to economic efficiency, and reduction of bloat, was to cut off connections to its various colonies. The option of joining with Canada was also viewed as impractical, and unlikely to occur; the closest Canadian neighbor lay more than a thousand kilometers away, to the east. For most British Colombians, annexation to the United States seemed most logical. Ultimately, however, British Columbia did confederate. The advocacy of the Confederation League, resulted in British Colombian's demanding that BC join Canada. On July 20, 1871, British Columbia joined Canada. In return, BC was absolved of its debt, which became Canada's responsibility, and Canada promised to build a railway to BC within 10 years.

British Columbia's industry is primarily, and has always been, resource centered. For large parts of its history, including the entire time it was a colony, BC was dominated by the big 4: Forestry, Mining, Logging, and Agriculture, which have shaped British Columbia's culture, and society.

British Columbia's forestry industry has always been booming. BC had a bonanza of massive trees, thanks to its location in the Pacific Rainforest region. This provided ample opportunity for entrepreneurs to build businesses. Massive sawmills sprung up, all over British Columbia, especially in what is now Vancouver and surrounding regions. However, this required massive amounts of human capital - which was surprisingly in short supply. To overcome this, massive numbers of immigrants were invited to Vancouver, and places like so. This changed BC's demographic makeup so much, that to try to stop it, the government passed several acts, to try and limit the number of immigrants. However, the change was already underway - BC subsequently became one of the most diverse places in North America, with people calling it home, from places like Asia, Europe, and even the Pacific Islands.

British Columbia's large mineral resources also led to a large mining industry. For the most of the 19th century, and well into the 20th century, mining was highly profitable. For the immigrants, once again, this was another opportunity to exploit. Large numbers of immigrants, skilled from their experience mining at home, filled up the labour demands, and quickly, new towns were formed. The city of Nanaimo, for instance, was founded thanks to a large amount of coal found in its harbour. Coal especially, was the fuel of the industry, as coal was required for everything it the time, from ships, to trains, to the heater in everyone's homes.

Thanks to BC's location on the coast, fishing has been very prevalent in British Columbia. Before agriculture had developed very far in BC, and well before farming fish was even a viable option, fishing was the only reliable way to get food. The native people of BC already had a very active fishing industry, with large hauls of salmon, and other creatures sustaining them. When civilization came, the fishing industry took off, as everybody needed to eat, and there was not enough agricultural goods to go around. In fishing, once again, it was the immigrants that pulled it off. Mostly Japanese workers, and their families, came. Using their rich heritage of industrialized fishing, they were able to out compete every other fisherman, that by the turn of the century, the dockyards, canneries, and fishing fleets were filled to the brim with the Japanese. Only the forced Japanese internment in WW2 put a halt to the monopoly the Japanese had on fishing in British Columbia. Today, fishing is still a powerful force, although fettered by ordinances to prevent overfishing.

The agriculture industry in BC is, and always has been humble. However, as they say, good things come in small packages, and the agricultural goods of BC, are about as good as they come. Due to the fact that BC has only about 2% arable land, the remainder being too dry, or too cold, or too remote, or a plethora of other reasons, BC has never been able to sustain a primary food agricultural industry. Even today, BC cannot grow enough food to feed its entire population, and imports foods instead, from the eastern provinces, such as Alberta, and Saskatchewan. However, where BC does grow food, the food is scrumptious, and award-winning. The Okanagan valley, is known for its award-winning fruits, and wine-related products. However, that is not where all the food is produced. In the Fraser valley delta, large amounts of other food crops are grown, such as wheat, and berries.

British Columbia's premier is John Horgan, leader of the provincial New Democratic Party, a social democratic party. The NDP governs British Columbia through a deal with the provincial Green Party, led by Andrew Weaver.[5] The BC Liberal Party is the main opponent to the NDP, and is led by Andrew Wilkinson. Other parties are active in British Columbia, such as the Conservative Party, led by Scott Anderson, although only the NDP, BC Liberal Party, and Green Party currently have seats.[6]

The flag of British Columbia was adopted in 1960. It is based on the provincial arms and the union jack.