World map showing where Asia is

Asia is a large region on Earth mainly in the northern hemisphere. Asia is connected to Europe in the west, forming a continent called Eurasia, though sometimes it is viewed as a separate continent from Europe.[1] Some of the oldest human civilizations began in Asia, such as Sumer, China, and India. Asia was also home to some large empires such as the Persian Empire, the Mughal Empire, the Mongol Empire, and the Ming Empire. It is home to at least 44 countries. Turkey, Russia, Georgia and Cyprus are partly in other continents. 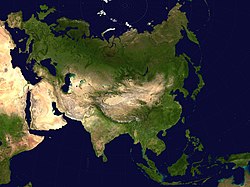 Asia includes a large amount of land. Covering about 30% of the world's land area, it has more people than any other continent, with about 60% of the world's total population. Stretching from the icy Arctic in the north to the hot and steamy equatorial lands in the south, Asia contains huge, empty deserts, as well as some of the world's highest mountains and longest rivers.

Asia is surrounded by the Mediterranean Sea, the Black Sea, the Arctic Ocean, the Pacific Ocean, and the Indian Ocean. It is separated from Europe by the Pontic Mountains and the Turkish Straits. A long, mainly land border in the west separates Europe and Asia. This line runs North-South down the Ural Mountains in Russia, along the Ural River to the Caspian Sea, and through the Caucasus Mountains to the Black Sea.

Some countries are variously located in both Europe and Asia, namely Russia, Georgia, Kazakhstan, Cyprus, and Turkey.

The Sinai Peninsula of Egypt lies in the Arabian peninsula, with the rest of the country lying in North-East Africa.