Kyrgyzstan (Kyrgyz: Кыргызстан), formally the Kyrgyz Republic, and sometimes known as Kirghizia, is a country in Central Asia. The country is landlocked (has no coast) and mountainous. It has borders with China, Kazakhstan, Tajikistan, and Uzbekistan. Its capital is Bishkek. It was a socialist republic of the Soviet Union, but became independent in 1991. The country was peaceful in the 1990s. Its president, Askar Akayev showed an autocratic and authoritarian character.

In 2005, there was an unexpected revolution after the elections of parliament (the legislature) in March. President Akayev resigned on April 4 of that year. Opposition leaders formed a coalition (a group from more than one party), and a new government was formed, led by President Kurmanbek Bakiyev and Prime Minister Feliks Kulov.

At the moment, different political groups are fighting for power in the republic. Three of the 75 elected members of Parliament have been murdered. Kyrgyzstan’s main religion is Islam. 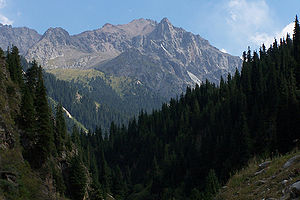 Kyrgyzstan is a landlocked country in Central Asia. It is farther from the ocean than any other country in the world. It borders Kazakhstan, China, Tajikistan and Uzbekistan. Mountains cover over 80% of the country.[7]

The land area of Kyrgyzstan is just a little bigger than the state of Nebraska.

Bishkek, the capital city, is in the north. It is largest city in Kyrgyzstan. The second largest is the ancient town of Osh.

Agriculture is an important part of the economy in Kyrgyzstan. Much farming is still being done by hand and by horse. Main crops include wheat, sugar beets, potatoes, cotton, tobacco, vegetables, and fruit.

Kyrgyzstan is rich in mineral resources. It has small petroleum and natural gas reserves. Among its mineral reserves are solid amount of coal, gold, uranium, antimony and other metals but not iron. Metallurgy is an important industry.