Uzbekistan is a country in Central Asia. Its capital and largest city is Tashkent. There are about 32 million people living in Uzbekistan, now. The neighbouring countries are Afghanistan, Kazakhstan, Kyrgyzstan, Tajikistan and Turkmenistan. It is a doubly landlocked country, of which there are only two in the world. Most people in Uzbekistan speak a language called Uzbek, a Turkic language similar to Uyghur and Turkish. In the Uzbek language, Uzbekistan is called "O‘zbekiston" and it means "the land of the true nobles". Uzbekistan has a long history. Humans first lived in Uzbekistan from before the 2nd millennium BC.[5] The current president today is Shavkat Mirziyoyev. Human rights in Uzbekistan are 'atrocious' according to Human Rights Watch

Islam is its largest religion. 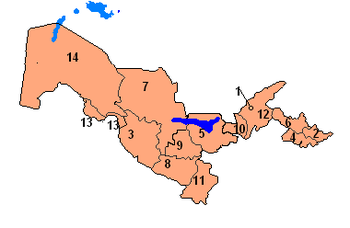