Where Tashkent is in Uzbekistan 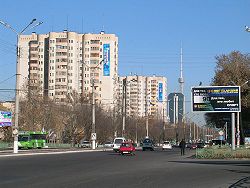 A large street in Tashkent

Tashkent (Uzbek: Toshkent or Тошкент, Russian: Ташкент; its name translates from Uzbek to "Stone City" in English) is the capital city of Uzbekistan. It is also the capital of Tashkent Province. The population of the city was 1,967,879 at the 2006 census.