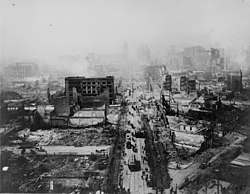 An earthquake is the sudden movement or trembling of the Earth's tectonic plates, that creates the shakes of the ground. This shaking can destroy buildings and break the Earth's surface. Sudden shake under water is called tsunami.

Who studies earthquakes is called seismology.[1] There can be many earthquakes over a short period of time in a small area. The sudden release of tension in the tectonic plates sends waves of energy that travel through the Earth. Seismology studies about the cause, repeats, type and size of earthquakes.

Earthquakes are measured using watching from seismographs. The magnitude of an earthquake and the power of shaking is usually reported on the Richter scale. The Richter Scale was invented by Charles Francis Richter in 1935. On the scale, 2 is scarcely noticeable, and magnitude 5 (or more) creates damage over a wide area.

Scientists cannot predict an earthquake before it happens. But we do know where earthquakes might happen in the future, like close to fault lines. An earthquake under the ocean can create a tsunami, this can create just as much destruction as the earthquake itself.

Earthquakes zones are divided into some parts of the world. The first is pacific belt. This part is the biggest part of seismic belt which means the largest activities of earthquakes caused by the movement of the earth's lithosphere as well as the volcanoes. The zone shape the most volcanoes located on the nations around the pacific ocean.[2]

The second part is the alpide. It is the seismic activities from Sumatra, Himalayan, europan to outer atlantic.

Earthquakes sometimes hit cities and kill hundreds or thousands of people. Most earthquakes happen along the Pacific Ring of Fire but the biggest ones mostly happen in other places. Tectonically active places are places where earthquakes or volcanic eruptions are quite repeated.

Causes of an earthquake

Earthquakes are caused by tectonic movements in the Earth's crust. The main cause is when tectonic plates ride one over the other, causing orogeny (mountain building), and severe earthquakes.[3]

The boundaries between moving plates form the largest fault surfaces on Earth. When they stick, motion between the plates leads to increasing stress. This continues until the stress rises and breaks, suddenly allowing sliding over the locked portion of the fault. This releases the stored energy as shock waves. The San Andreas fault in San Francisco, and Rift valley fault in Africa are faults like this. 1. Volcanic Earthquakes : Earthquakes which are caused by volcanic eruptions are quite devastating. However, these are confined to areas of active volcanoes. 2. Collapse Earthquakes : In areas of intense mining activity, often the roofs of underground mines collapse and minor tremors take place. These are called collapse earthquakes. 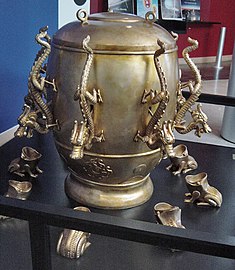 Replica of ancient seismometer with pendulum sensitive to ground tremors. In Luoyang in 133 AD, it detected an earthquake 400 to 500 km (250 to 310 mi) away
There are three main types of geological fault that may cause an earthquake: normal, reverse (thrust) and strike-slip. Normal faults occur mainly in areas where the crust is being extended. Reverse faults occur in areas where the crust is being shortened. Strike-slip faults are steep structures where the two sides of the fault slip horizontally past each other.

Most earthquakes form part of a sequence, related to each other in terms of location and time.[4] Most earthquake clusters consist of small tremors which cause little to no damage, but there is a theory that earthquakes can recur in a regular pattern.[5]

A foreshock is an earthquake that happens before a larger earthquake, called the mainshock.

Earthquake swarms are sequences of earthquakes striking in a specific area within a short period of time. They are different from earthquakes followed by a series of aftershocks by the fact that no single earthquake in the sequence is obviously the main shock, therefore none have notably higher magnitudes than the other. An example of an earthquake swarm is the 2004 activity at Yellowstone National Park.[6]

Sometimes a series of earthquakes happen in a sort of earthquake storm, where the earthquakes strike a fault in clusters, each triggered by the shaking or stress redistribution of the previous earthquakes. Similar to aftershocks but on adjacent segments of fault, these storms happen over the course of years, and with some of the later earthquakes as damaging as the early ones. Such a pattern happened in the North Anatolian fault in Turkey in the 20th century.[7][8]

File:20110311Houshu.ogv Tsunami or a chain of fast moving waves in the ocean caused by powerful earthquakes is a very serious challenge for people's safety and for earthquake engineering. Those waves can inundate coastal areas, destroy houses and even swipe away whole towns.[9] This is a danger for the whole mankind.

Unfortunately, tsunamis cannot be prevented. However, there are warning systems[10] which may warn the population before the big waves reach the land to let them enough time to rush to safety.

Earthquake-proof buildings are constructed to withstand the destructive force of an earthquake. This depends upon its type of construction, shape, mass distribution, and rigidity. Different combinations are used. Square, rectangular, and shell-shaped buildings can withstand earthquakes better than skyscrapers. To reduce stress, a building's ground floor can be supported by extremely rigid, empty columns, while the rest of the building is supported by flexible columns inside the empty columns. Another method is to use rollers or rubber pads to separate the base columns from the ground, allowing the columns to shake parallel to each other during an earthquake.

To help prevent a roof from collapsing, builders make the roof out of light-weight materials. Outdoor walls are made with stronger and more reinforced materials such as steel or reinforced concrete. During an earthquake, flexible windows may help hold the windows together so they don’t break.