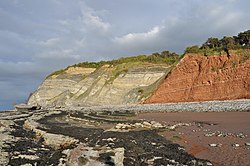 Normal fault on the coast of Somerset, England. On left, younger blue-grey rock is late Triassic to early Jurassic. On right, the red rock is older Triassic mudstone. Strata of the red rock deformed when it moved upwards. The line of the fault runs along the beach, shown by the rock/sand divide. 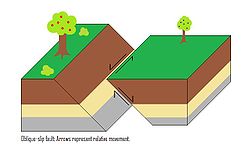 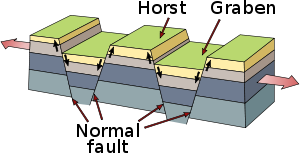 A fault is a fracture, or break, in the Earth's crust (lithosphere). Some faults are active. Here, sections of rock move past each other. This sometimes makes earthquakes.

Faulting occurs when shear stress on a rock overcomes the forces which hold it together. The fracture itself is called a fault plane. When it is exposed at the Earth's surface, it may form a cliff or steep slope called a fault scarp.

The angle between the fault plane and an imaginary horizontal plane is called the dip angle of the fault. Faults may dip shallowly or steeply.

Faults are categorized into three types: