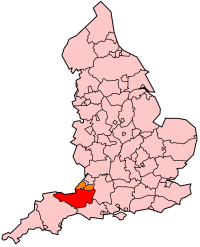 A map showing where Somerset is in England. The main county is coloured red. The special unitary authorities linked to Somerset are coloured orange.

Somerset is a county in South West England.

The main town of Somerset was Somerton, but it is now Taunton. There are two cities in Somerset. They are Bath and Wells.

The name "Somerset" comes from the Anglo-Saxon phrase Sumorsaete, which was used to describe people from Somerton.

In the past, the northern border of Somerset was the River Avon. However, as the city of Bristol has grown, the border moved south.

In 1974 parts of north Somerset, the city of Bristol and parts of south Gloucestershire were joined into a new county. This county was named Avon. In 1996 Avon was split into 4 parts, which are now unitary authorities. People usually say that 2 of these parts (named North Somerset and Bath and North East Somerset) are part of Somerset, even though they have their own councils.

The oldest prison in England which is still used is in a town named Shepton Mallet in Somerset. Somerset also has the world's oldest road which people built. It is called the Sweet Track; it was built in about 3800 BC. 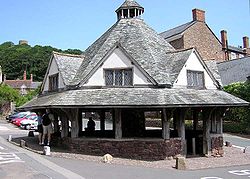 There is not much large industry in Somerset, but Bridgwater is a port, and Yeovil is important in building helicopters.

Tourism is an important industry in the county; in 2001 about 23,000 people worked in tourism. Tourists like Somerset because it is very beautiful, with much countryside and few big towns. Somerset has many places to visit:

Farming is an important industry in Somerset, but not as many people work in this industry today. Somerset is famous for its cider (an alcoholic apple drink) and it has many apple orchards.

A map showing the districts of Somerset

The numbers on the map are linked to the numbers below.

This is a list of the main towns and cities in Somerset: