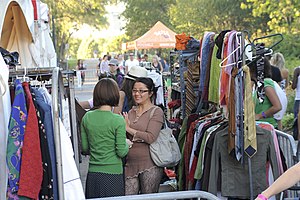 We also have what we call exports and imports

The things that are given from one person to the other are called goods.

Services can also be part of a trade. One person can do a job or work for another, and get something in return in a trade.

A place where trading takes place is called a market.

Economics includes the study of trade.

Trade occurs not just between people, but also between large companies and even countries. Governments sometimes take some of the money or goods involved trade between countries. This is a type of tax called a tariff. Smugglers try to trade without paying tariffs.

Free trade between two countries is when there are small or no tariffs, quotas, or other restrictions on trade.

There are two forms of trade. They are

Retail is the process of selling goods or services to consumers through many means of distribution to earn a profit. The term "retailer" usually means where a person sells a small amount of good to many individuals, who are consumers.[3]

International trade may be divided into three. They are:

An import is a good or service that was bought in one country but was produced in another country.[6]

An export is a good or service that was produced in one country but was sold to another country.[6]

An entrepôt is a port, city, or trading post where goods may be imported, stored or sold. These cities grew because of the growth of long-distance trade.[7]