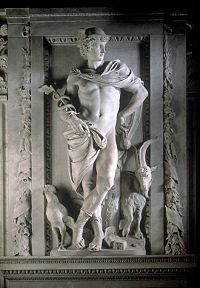 A sculpture of Mercury

Mercury (Latin: Mercurius) is the god of trade, commerce, financial gain, messages/communication, travellers and boundaries, trickery, merchants and thieves in Ancient Roman religion and myth. Son of Jupiter and Maia, Mercury was a major god in Roman state religion, being a member of the Dii Consentes, the principal group of ancient Roman deities. The Roman counterpart to Hermes, the god is depicted as holding a caduceus in his left hand. The planet Mercury and the element Mercury are named after him.