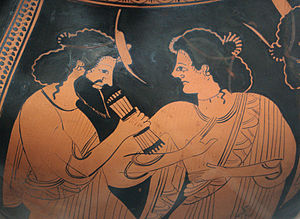 Maia is the goddess of the fields in Greek mythology. She is the oldest of the Pleiades. She is also the most beautiful and the shyest.

The Pleiades were the seven daughters of Atlas and Pleione. Maia and her sisters were all born on Mount Cyllene, which is in Arcadia.

Maia was the mother of Hermes by Zeus, who is another god. She gave birth to Hermes in a cave in Arcadia. After Maia gave birth to Hermes she wrapped him in blankets and then went to sleep. When she woke up, Hermes had crawled away to Thessaly and had invented the lyre and stole some of Apollo's cattle.

Maia also looked after Arkas when Hera had turned his mother, Kallisto, into a bear.