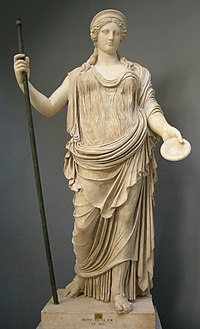 A statue of Hera at the Vatican.

In Greek mythology, Hera was the goddess of woman, family, marriage and familial love. She is married to Zeus. She is one of the Twelve Olympians. Hera is also a goddess of the sky and starry heavens. The Ancient Greeks said that Hera is one of the most beautiful goddess, nearly as pretty as Aphrodite. However, her jealous and vengeful nature make her less so.

Her own special signs are the peacock, the pomegranate, and the cow. Her other important items are the crown and veil.

Hera's parents are Kronos and Rhea. Her brothers and sisters are Zeus (who she also married), Hestia, Demeter, Hades, and Poseidon. Hera has two daughter and two sons, Hebe, Eileithyia, Ares and Hephaestus. Her step-children include Athena, Dionysus, Persephone, and the twins, Hermes and Artemis[1].

Hera is the queen of all the Greek gods and goddesses. She is often thought of as being wise and serious. Hera is also called 'The Queen of Heaven' because she rules over Mount Olympus where all of the gods and goddesses live. Long before her marriage to Zeus, she ruled over the heavens and the Earth. She is responsible for every living thing, including the seasons and the weather. Some legends and ancient myth told that, Hera (Juno) is also the goddess of empire, queens and kingdoms. The name Hera means 'beautiful lady'.

Dionysus is a son of Zeus by a human woman. Hera tried to kill him when he was a baby with the Titans. The Titans were going to make Dionysis come to him by showing him toys, and then eat him. Zeus scared the Titans away with his thunderbolts, but the Titans had already eaten everything but Dionysus's heart. Zeus used the heart to make Dionysus again. He did this by putting the heart in the womb of Semele. Dionysus was then born for a second time.

Echo is a nymph in Greek mythology. She once had the job of distracting Hera from Zeus having relationships with other women. She did this by leading Hera away and flattering her. When Hera found out she was very angry with Echo. She put a curse on her that meant that she could only speak the words of other people after she had heard them. It is due to this story that we get the meaning behind the word echo.

Io is a mistress of Zeus. Hera almost caught Io and Zeus together, but Zeus hid Io by turning her into a cow. Hera was not fooled and said that Zeus had to give her the cow as a present. Once Io belonged to Hera she was looked after by Argus. It was Argus's job to make sure that Io and Zeus were never together. Zeus ordered Hermes to kill Argus so that Io would be free. Hermes did this by killing Argus after he had been lulled to sleep. Hera then sent a gadfly to sting Io as she walked about on the earth.

Lamia is a queen of Libya who Zeus was in love with. Hera was jealous of Lamia and turned her into a monster. When she was a monster, Lamia then killed her children. Another version of this story is that Hera killed Lamia's children and was then so sad that she turned into a monster. Hera also put a curse on Lamia. The curse was that Lamia could not close her eyes. Hera chose this curse because she wanted Lamia to always think about the picture of her dead children. Zeus then gave Lamia the gift of being able to take her eyes out, so that she could rest. She could then put them back in again afterwards.

When Hera found out that Leto was pregnant with twins by Zeus she was angry. She banished Leto from Olympus, she also banned her from giving birth on any mainland or island that was known. Leto found a floating island, called Delos. It was neither a mainland or a real island, so Leto was allowed to give birth there. Artemis was born first, who then helped Leto to give birth to Apollo. After Artemis and Apollo was born, Hera was furious. So she sent the snake-monster, Python to hunt Leto and her twins. When Apollo reached to his adulthood, he slayed Python in Delphi and decreed that the humans will built a temple there in honour of his victory against Python. Few years later, Hera sent a giant named Tityos to rape Leto, but he was killed by Apollo and Artemis. Delos was later held down with four pillars so that it would not float around anymore. It is said to be surrounded by swans and later became a sacred place to Apollo.

Heracles is the stepson and enemy of Hera. Hera discovered that her husband, Zeus had an affair with a mortal women named Alcmene and she became extremely jealous at the mortal woman. Hera used all the power she had to prevent Alcmene from giving birth to Heracles. When Alcmene was about to give birth to Heracles, Hera requested that Zeus swore an oath and declare upon all the other Gods that the descendant of Perseus will be born on that day and the child will rule eveything around him. Then Hera descended from Olympus to Argos and cause the wife of Sthenelus, son of Perseus to gave birth to Eurystheus after only seven months while Hera tried to prevent Alcmene into giving birth to Heracles by sending her daughter Eileithyia and witches. This cause the fullfilment of Zeus' oath in that it was Eurystheus instead of Heracles. Hera continues her wrath on Heracles while he was still an infant. She send two poisonous snakes to Heracles to kill him in his cradle. Heracles throttled the snake with his bare hands and the nurse saw him playing with the dead snake as if they were a child's toy. Hera continues to torture her stepson throughout his life.