Ruins of Pompeii from above, with Vesuvius in the background (seen from a drone) 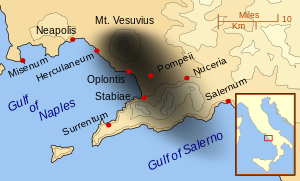 Pompeii was a Roman city. Now it is a UNESCO World Heritage Site.[1]

Pompeii is now considered one of the world's most important historical sites because of the way the volcanic ash preserved the city and its people. This gives historians and archaeologists a vivid picture of life in the Roman Empire around 2,000 years ago.

Archaeologists have found graffiti written by the people who lived in the town.[3]

People often wrote on walls, and archaeologists have been able to read some of what they wrote. Pompeii is an interesting attraction for tourists from around the world and is visited by 2.5 million people every year.

The town was started around the year 600 BC. It was started by a group of people from central Italy, the Osci. They chose to start it in this location because it was already an important location for trade by both land and sea. By the 5th century BC, Pompeii had become part of Rome. While under Roman control, Pompeii was improved a lot. The Romans built Aqueducts, and these were used to provide the citizens with water.

Pliny The Younger was a witness to the eruption of Mount Vesuvius. He sent letters to a friend describing the eruption. For he was much too scared to go any closer, he stayed where he was. He was quite a distance from the sight, but close enough to see the eruption clearly.

Recent research has questioned the day of the eruption, with some scholars arguing for an autumn date.

A Street in Pompeii