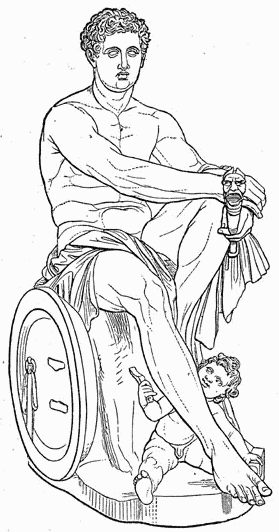 Apollo, god of Sun and light

Aphrodite, goddess of love and beauty

Greek mythology is a large collection of stories, started in Ancient Greece, about the beginning of the world, and the lives and adventures of gods, goddesses, heroes, and heroines.

The gods and goddesses in Greek Mythology are all assigned as the god of a certain part of the world. For instance, Zeus is the god of the sky, Poseidon is the god of the sea and Hephaestus is the god of fire. They can make themselves invisible to humans and move to any place in a very short amount of time. The gods and goddesses also never get sick and can only be hurt by very unusual causes. This is called being immortal. The king of the gods was Zeus, who lived with the other gods on top of Mt. Olympus in Greece. The gods were children of the Titans such as Kronos and Rhea.

There are lots of monsters in Greek mythology. Many are hybrids of animals or people. Some important Greek monsters are minotaurs, satyrs, centaurs and chimera. Hybrid animals are called chimeras sometimes because of the monster.

The myth of the Sun

The Greeks believed that the sun was pulled across the sky by a chariot driven by the god, Apollo. Apollo was the brother of Artemis (the goddess of the hunt and the moon) and he himself was the god of archery, poetry, and prophecies. Everyday, Apollo would drive the Sun Chariot across the sky and provide light and heat for the people of Greece.

The Ancient Greeks believed that in the beginning, the world was in a state of nothingness, which they called chaos. Suddenly, from light, came Gaia (mother earth) and Uranus (the sky). Gaia and Uranus had 6 sets of twins. The most important of the 12 children were Kronos and Rhea.

Gaia gave birth to some monsters called cyclops. Uranus disliked the cyclopes, so he forced Gaia to keep them in her womb. Gaia, angered by the amount of pain that Uranus had put her through by holding babies in her womb, sought revenge on Uranus. Kronos threw Uranus into the ocean.

Kronos married his sister Rhea and gave birth to 6 children, who were called the gods. Kronos, who was afraid of a prophecy delivered to him a while ago, swallowed each of his children each time they were born. Rhea did not like this, so she saved Zeus and gave Kronos a rock to eat instead. Zeus was raised by a centaur named Chiron, who is also the son of Kronos, in a mountain cave. When Zeus was old enough, he tricked Kronos into drinking a mixture of wine and mustard. Kronos vomited up the rest of the gods, who, being immortal, had been growing up completely undigested in Kronos' stomach. Zeus then banished Kronos to Tartarus.

Zeus was from then on the leader of the gods, and created man for his own entertainment.