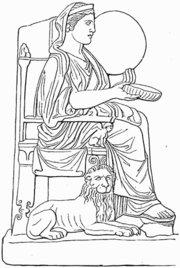 Rhea (Greek: Ῥέα) is one of the Titans in Greek mythology, daughter of Gaia and Ouranos. She was the sister and wife of Kronos, and the mother of the first generation of the Olympian gods (Hestia, Demeter, Hera, Hades, Poseidon, and Zeus). Known as the “Great Mother” (Magna Mater), Rhea had little influence in Greek cult, although she was identified with the Phrygian mother-goddess Cybele. Her Roman equivalent is Ops.