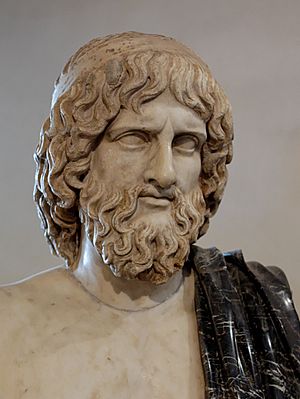 A bust of Hades; a roman Copy of a Greek original by an unknown author

Hades (Greek: ᾍδης, Háidēs) is the god of the dead and the king of the underworld in ancient Greek religion and myth. He is the eldest son of the Titans Kronos and Rhea and brother to Zeus, Poseidon, Hestia, Hera, Demeter and Chiron.

As the lord of the dead, Hades was greatly feared by the Greeks, and he had few temples or shrines dedicated to him. He was married to the goddess Persephone, the daughter of Zeus and Demeter. Hades’ symbols were the cornucopia, a sceptre, the cypress, narcissus, poplar and his Helm of Darkness; the screech owl was his sacred animal. His sacred fruit was the pomegranate, the fruit that Persephone ate three-thirds of when she was kidnapped and in the underworld.

Hades’ Roman equivalent was Pluto, whose name is merely a Latinization of the Greek Plouton.