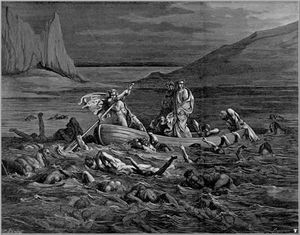 Three judges, by the names of Rhadamanthus, Minos, and Aeacus, would then decide where you would go. People that lived normal lives would go to The Fields of Asphodel. Heroes would go to The Fields of Elysium. People who did horrible things would go the The Fields of Punishment. If you were put into Elysium, you could choose to be reborn or stay. If you went to Elysium three times, then you went to the Isle of the Blessed. This was like the ultimate heaven. Tartaros (Latin: Tartarus) was another place in the underworld, where immortal enemies of the current Twelve Olympians are eternally punished, for example Kronos and the other Titans. Tartaros overlaps with the fields of punishment.