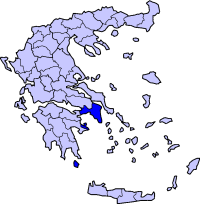 Attica on the map of Greece

Attica is in the south of Greece. It is a peninsula between Peloponnese and Euboea. Its the southest point is the cape Sounion. Attica has five mountains with an elevation over 1000 meters, Parnitha (the highest of all), Penteli, Hymettus, Pateras mountain and Kithairon. Attica has borders with Boeotia prefecture to the north and Corinthia prefecture to the west. Attica is surrounded by the sea of Saronic gulf to the west and South Euboean golf to the east. These seas are a part of Aegean sea.