Athens is one of the most famous cities in the world. It is the capital city of Greece and the most important financial, industrial, maritime, political and cultural center of the country.

It is also one of the world's oldest cities. Scholars disagree on whether the city is named for the goddess Athena, or the goddess for the city. Athens has a population of about 4 million people and is growing. It is in the prefecture, or division of the country, of Attica. Its port, Piraeus, is the largest passenger port in Europe, and the second largest port in the world.

Ancient Athens was a powerful city in Classical times. It was known for its philosophy and learning. The city was home to various ancient philosophers. Its schools of philosophy included Plato's Academy and Aristotle's Lyceum.

The Parthenon, a temple dedicated to the goddess Athena, is the most famous of its ancient monuments. It was built between 447 BC and 438 BC and its decoration continued until 431 BC. Athens had its own Constitution and it created the world's first known democracy.

The city started to decline in 529 AD, when the Emperor Justinian I closed its philosophical schools. The Parthenon was made a Christian church. That saved it later from the destruction of non-Christian temples, in the theocracy which followed Justinian's conversion..

The Ottoman Turks took control of Athens in 1458. The Turks made the Parthenon into a Muslim mosque. The Parthenon was later damaged in 1687 when gunpowder exploded inside it.

Athens was freed from the Turks during the Greek War of Independence (1821–1833). It was an unimportant little town then, but the Greeks made it their capital.

Athens is home to two UNESCO World Heritage Sites, the Acropolis of Athens and the 11th century Daphni Monastery.

There are many museums in the city. Some of the most important ones are: 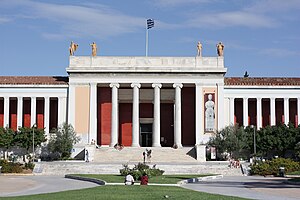 The Athens Metro, inaugurated in January 2000, is the only metro system in Greece. It has a total of three lines. It is famous for many of its stations that feature works of art and displays of the archeological remains found during its construction.

The Athens Tram has a total length of 27 km and covers ten Athenian suburbs from Syntagma Square (the central square of Athens) to the southwestern part of the city. The tram network is still under construction as it will be extended toward the port of Piraeus.

The Attiki Odos is a modern motorway system that runs in the greater Athens metropolitan area and has a total length of 65 kilometres.

Athens has these sister cities: