Rabat (Arabic: الرباط, transliterated ar-Rabāṭ or ar-Ribāṭ, literally "Fortified Place"), population 577,827 hab. (2014 estimate), is the capital of the Kingdom of Morocco. It is also the capital of the Rabat-Salé-Kénitra region.

The city is on the Atlantic Ocean at the mouth of the river Bou Regreg. On the other side of the river is Rabat's bedroom community. Together the two cities with Temara have a population of 1.8 million. Silting problems have lowered the city's role as a port. However, Rabat and Salé still maintain somewhat important textile, food processing and construction industries. Some are from sweatshop labor by major businesses.

In addition, tourism and being home to all foreign embassies in Morocco help to make Rabat the second most important city in the country after the larger and economically more significant Casablanca.

BC to 17th century

Rabat's history began with a settlement, known as Chellah on the banks of the Oued Bou Regreg[3] in the third century BC. In 40 AD, Romans took over Chellah and changed it to the Roman settlement of Sala Colonia. Rome held the colony until 250 AD. They gave it up to local rulers. In 1146, the berber Almohad ruler Abd al-Mu'min turned Rabat's ribat into a full scale fortress. It was used as a starting point for attacks on Spain. In 1170, due to its military importance, Rabat acquired the title Ribatu l-Fath, meaning "stronghold of victory," from which it gets its current name.

Yaqub al-Mansur (known as Moulay Yacoub in Morocco), another Almohad Caliph, moved the capital of his empire to Rabat.[4] He built Rabat's city walls, the Kasbah of the Udayas and began construction on what would have been the world's largest mosque. However, Yaqub died and construction stopped. The ruins of the unfinished mosque, along with the Hassan Tower, still stand today.

Yaqub's death a period of decline at first. The Almohad empire lost control of its land in Spain and much of its African territory. Eventually this led to its total collapse. In the 13th century, much of Rabat's economic power shifted to Fez. In 1515 a Moorish explorer, El Wassan, reported that Rabat had declined so much that only 100 houses remained with people living in them. An increase of Moriscos, who had been removed from Spain, in the early 17th century helped boost Rabat's growth.

Rabat and neighboring Salé united to form the Republic of Bou Regreg in 1627. The republic was run by Barbary pirates who used the two cities as base ports for starting attacks on shipping. The pirates did not have to fight with any central authority until the Alaouite Dynasty united Morocco in 1666. They attempted to establish control over the pirates, but failed. European and Muslims authorities continued to attempt to control the pirates over many years. The Republic of Bou Regreg did not collapse until 1818. Even after the republic's collapse, pirates continued to use the port of Rabat. This led to the attack of the city by Austria in 1829 after an Austrian ship had been lost to a pirate attack.

The French invaded Morocco in 1912 and established a protectorate. The French administrator of Morocco, General Hubert Lyautey,[5] decided to move the country's capital from Fez to Rabat. Among other factors, citizens had made Fez an unstable place because of their desire to rebel. Sultan Moulay Youssef followed the decision of the French and moved his home to Rabat. In 1913, Gen. Lyautey hired Henri Prost who designed the Ville Nouvelle (Rabat's modern quarter) as an administrative sector. When Morocco became independent in 1956, Mohammed V, the then King of Morocco, chose to have the capital remain at Rabat.

After World War II, the United States created a military presence in Rabat at the former French air base. By the early 1950s, Rabat Salé Air Base was a U.S. Air Force based hosting the 17th Air Force and the 5th Air Division. These divisions oversaw forward basing for Strategic Air Command (SAC) B-47 Stratojet aircraft in the country. With the destabilization of French government in Morocco, and Moroccan independence in 1956, the government of Mohammed V wanted the U.S. Air Force to pull out of the SAC bases in Morocco. He insisted on such action after Americans became involved in Lebanon in 1958. The United States agreed to leave as of December 1959. They were fully out of Morocco by 1963. SAC felt the Moroccan bases were much less critical with the long range capability of the B-52 Stratofortresses that were replacing the B-47s. It also had completed USAF bases in Spain in 1959.[6]

With the USAF leaving Rabat-Salé in the 1960s, the facility became a primary facility for the Royal Moroccan Air Force known as Air Base Nº 1, a status it continues to hold. 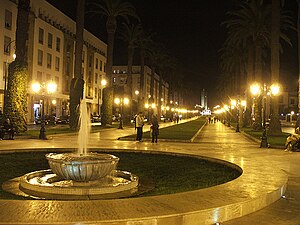 The biggest place for theatre is the Theatre Mohamed V in the centre of the town. The city also has a few official galleries and an archeological museum. Many organisations are active in cultural and social issues. Orient-Occident Foundation and ONA Foundation are the biggest of these. An independent art scene is active in the city. L'appartement 22, which is the first independent space for visual arts created by Abdellah Karroum, opened in 2002.

Rabat was selected as a filming location for the war film Black Hawk Down (2001).

Rabat will bid to host the 2020 Summer Olympic Games.

Rabat is twinned with:

Rabat features a Mediterranean climate. Along the Atlantic Ocean, Rabat has a mild, temperate climate. It moves from cool in winter to warm days in the summer months. The nights are always cool (or colder in winter) Daytime temperatures generally always rise about +9/10 C° (+15/18 F°) every day. The winter highs usually reach only 17.5 °C (63.5 °F) in December-January (see weather-table below).