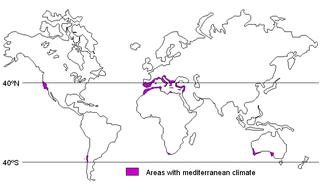 A Mediterranean climate is a climate that has dry summers that are hot or warm as well as winters that are cool or mild with moderate or high rainfall. It includes the climate of much of the land near the Mediterranean Sea. Outside the Mediterranean, one can find this climate only in rather small areas. It is found in many places that are roughly between latitudes 30° to 45° north and south of the equator.

The Fitzgerald River National Park, in Western Australia with the dense scrub vegetation and biodiversity of Mediterranean climate zones. There are 62 plant species which are unique to the 3,299 km² (1,274 mi²) park and a further 48 are rarely found elsewhere.