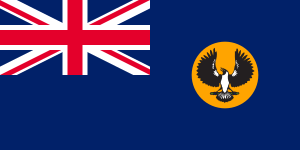 South Australia is one of the six states of Australia. The capital city is Adelaide.

South Australia was a freely-settled, planned British province. Settlement began on December 28, 1836. This was when the state was proclaimed at The Old Gum Tree by Governor Hindmarsh. The aim was to create the province as a center of civilization for free immigrants, promising civil liberties and religious tolerance.

The state is known for its festivals and fine wine.