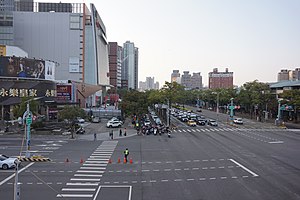 Scene at the intersection of Huizhong Rd. and Taiwan Blvd. 01