Manhattan is one of the five boroughs that make up New York City, and is the center of the New York metropolitan area. It is also located over the same area as a county of New York state called New York County. Although it is the smallest borough, it is the most densely populated borough. Most of the borough of Manhattan is on Manhattan Island, but the Marble Hill neighborhood is part of the mainland United States (by way of the Bronx). Several smaller islands, including Roosevelt Island, are also part of Manhattan.

The Dutch bought it from the Native Americans and called it New Amsterdam, then the English took it over and changed the name to New York. The name Manhattan comes from the Munsi language of the Lenni Lenape meaning island of many hills. Other theories say that it comes from one of three Munsi words. "Manahactanienk" meaning "place of inebriation". Other possibilities are "manahatouh" meaning "a place where wood is available for making bows and arrows" and "menatay" meaning simply "the island." [2]

Manhattan is an important commercial, financial, and cultural center of both the United States and the world.[3][4] Most major radio, television, and telecommunications companies in the United States are based there, as well as many news, magazine, book, and other media publishers. Manhattan has many famous landmarks, tourist attractions, museums, and universities. It also has the headquarters of the United Nations.

Before colonization, the Lenape Indians lived in the area that is now called Manhattan.[5] In 1524, Lenape people in canoes met Giovanni da Verrazzano, the first European explorer to pass New York Harbor, although he may not have entered the harbor past the Narrows.[6] Henry Hudson, an Englishman who worked for the Dutch East India Company, made the first map of the area.[7] 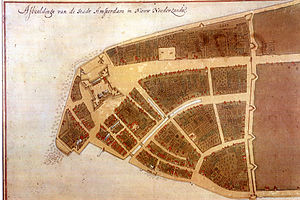 Lower Manhattan in 1660, when it was part of New Amsterdam. The large building toward the tip of the island is Fort Amsterdam. North is on the right in this map.

In the 1620s, the first large European colony was started in New Netherland, when the Dutch began trading fur on Governors Island.[5] In 1625, the Dutch chose Manhattan Island to build Fort Amsterdam, a citadel for the protection of the new arrivals. It would later be called New Amsterdam (Dutch: Nieuw Amsterdam). The creation of New Amsterdam was recognized as the birth of New York City.

On May 24, 1626, Manhattan was bought from the Native Americans living on the island. The price was trading goods worth 60 guilders, which was worth about 24 dollars at the time. The currency calculations from the International Institute of Social History in Amsterdam say that 60 guilders in the 1620s cost around $1000 now.[8]

In 1647, Peter Stuyvesant became the last Dutch Director General of the colony. New Amsterdam was considered an official city on 3 February 1653. In 1664, the British conquered New Netherland and renamed it "New York" after the English King James II, then known as Duke of York and Albany. Stuyvesant and his council made a deal with the British where New Netherlanders were promised liberties, including freedom of religion, under British rule. In August 1673, the Dutch took control of the island again, calling the city "New Orange" (Dutch: Nieuwe Oranje). The Dutch lost control of New Netherland forever to the English in November 1674 by treaty.

Manhattan was the center of many campaigns, battles and meetings during the American Revolution. In 1765, all of the colonies worked together for a unified political aim when the Stamp Act Congress (meeting) of representatives from across the Thirteen Colonies was held in New York City to write The Declaration of Rights and Grievances.[9]

The Sons of Liberty, a Boston based group, were part of a long-term battle with British authorities over liberty poles that were sometimes raised by the Sons of Liberty and cut down by the British. The disputes ended when the revolutionary New York Provincial Congress took power in 1775.[10]

Manhattan was the center of a series of large battles in the early American Revolutionary War.[11] These battles were called the New York Campaign, where British forces and colonists fought for control of New York City and the state of New Jersey. The rebel Continental Army, led by George Washington, had to leave Manhattan after losing the Battle of Fort Washington on 16 November 1776. Shortly after, Manhattan was greatly damaged by the Great Fire of New York in 1776.

Victory gave the British control of the area. They used the city as the center for political and military activities for the rest of the war. Loyalists from elsewhere came to the city as refugees from the Rebels and to join the war.

Years later, Washington came back to Manhattan with his army. On Evacuation Day, the last British occupation forces left the city on 25 November 1783.[12] On 30 April, 1789, Washington was inaugurated (officially became) the first president of the United States and took his oath of office at Federal Hall on Wall Street.[13][14] 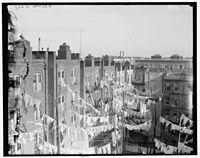 In the early 19th century, Manhattan grew in population and economically. Another great fire in 1835 destroyed much of the city but it was soon rebuilt. Because of the Great Irish Famine, a lot of Irish people emigrated (left their country) to live in New York; they made up for 25% of Manhattan's population at the time.[15] Many of the Irish people lived in a part of the Lower East Side known as the Bowery or in another section called Five Points.

After the Civil War, many immigrants of Italian,[16] Polish[17] and Jewish[18] backgrounds came to Manhattan and lived in tenements in a part of the city called the Lower East Side. Over a million people lived in the area at one point.

An Irish political machine called Tammany Hall was very important to New York City during the Gilded Age.[19] With the support of mostly Irish immigrants, it grew as a political machine.[19] The support helped win the election for the first Tammany mayor, Fernando Wood, in 1854.[19] Central Park, which opened to the public in 1858, became the first landscaped park in any American city and the country's first public park.[20]

The rate of immigration from Europe shot up after the Civil War, and New York became the most popular state for immigrants in the United States. Because of this, the French built and gave New York the Statue of Liberty on October 28, 1886. Soon after, the boroughs of Manhattan and Brooklyn were combined into one city. 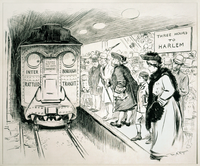 A political cartoon of the bad service of the Interborough Rapid Transit in 1905, from the New York Herald

In the beginning of the 20th century, many new things were built in the city, like skyscrapers and the New York City Subway. The first subway transit center, the Interborough Rapid Transit or IRT, opened to the public in 1904.[21] The installation of the Subway helped tie the new city together, as did new bridges to Brooklyn. In the 1920s, many African-Americans came to live in Manhattan during the Great Migration from the American South, and the Harlem Renaissance.[22] New York City became the most populous city (city with the most people) in the world in 1925, overtaking London, which had held the title for a century.

Between World War I and World War II, reformist Fiorello La Guardia was elected as the new mayor in 1933 and took office in 1934,[23] marking the fall of Tammany Hall after 80 years of dominating politics in New York City. Once the city's demographics were steadier, labor unionization provided protection and affluence to the working class. Despite the Great Depression, some of the world's tallest skyscrapers of the time were built in Manhattan during the 1930s, including many Art Deco masterpieces that are still part of the city's skyline today. The most well-known structures are Empire State Building, the Chrysler Building, and the GE Building.

Following the end of World War II, a lot of veterans came home to the United States. This led to the development of private communities that were intended to be sold or rented out to returning soldiers, resulting in an economic boom. An example of one of the communities built to attract veterans looking for homes is Stuyvesant Town—Peter Cooper Village, which opened in 1947. In 1951, the United Nations relocated from its first headquarters in Queens, to the East Side of Manhattan.

Population and industry began to decline in the 1960s. The Stonewall riots were a series of violent demonstrations by members of the gay community. By the 1970s, the city had gained a reputation as a graffiti-covered, crime-ridden relic of history. In 1975, the city government went bankrupt (ran out of money), and its pleas for financial help were rejected at first. On 30 October 1975, the New York Daily News reported the event with the headline as "Ford to City: Drop Dead".[24] The city received a federal loan and debt restructuring. After the economic downfall and recovery, New York State kept a close watch on New York City's economy.[25]

In the 1980s, Wall Street was revived from its slump, and the city reclaimed its role at the center of the worldwide financial industry. During this time, Manhattan was also at the heart of the AIDS crisis, with Greenwich Village being a major center of the epidemic. Gay Men's Health Crisis (GMHC) and AIDS Coalition to Unleash Power (ACT UP) were organizations that were started because of the crisis.[26][27] Their purpose was to advocate on behalf of those AIDs victims.[26][27]

Crime rates began to drop greatly in the 1990s. Murder rates were 537 in 2008[28] compared to 2,245 in 1990.[29] The crack epidemic and its associated drug-related violence had died down, and was under great control by the city. Many people who had moved out of the city came back because the city once again became the destination of immigrants from around the world, joining with low interest rates and Wall Street bonuses to fuel the growth of the real estate market.