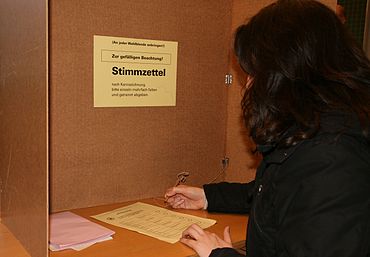 Today, an election in Germany is picking one of several options (or candidates). The notice tells voters to "fold each ballot paper several times and hand it in separately". 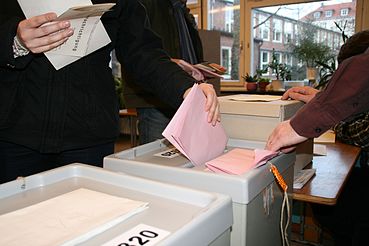 Each folded paper is dropped into a box.

An election is a way people can choose their candidate or their preferences in a representative democracy or other form of government.[1]

Most democratic countries hold new elections for their national legislature every few years. What elections do is select representatives for the local areas. These are called MPs (Members of Parliament) in the British parliamentary system. Parliamentary systems may have a head of government and a head of state, but sometimes the two posts are held by the same person.

As a foundation of democracy, voting in elections has been adopted in most countries around the world. Whilst the process of electing an individual as a representative in a government can be simple, many election candidates spend mass amounts of money on their campaigns. The past decade has seen a consistent trend of politicians and election candidate spending more and more on their campaigns. Higher household incomes, inflation and population growth are all factors that have contributed to this trend of higher election spend.[2]

Every country around the world has different rules and regulations when it come sot voting in elections. The biggest differences amongst most major countries is, the age in which an individual may vote and whether voting in an election is compulsory or not. Argentina, Brazil and Austria are among the few countries where the legal voting age is 16.

Countries that are not democracies can also hold elections. This is usually done to let the people choose a local representative (like a mayor). Also many countries call themselves democracies, but behind the scenes have a more autocratic form of government.

Vatican City is a theocracy: The pope (and a few high-ranking clerics) run the state. When the pope dies, or steps down, a number of high-ranking priests (called cardinals) select a new pope, through an election. When they are done, they will announce the result in a speech, called Habemus Papam (Latin: We have a pope)

Elections keep a democratic country functioning, as they give people the right to select their own government. However, there are ways a government can "fix" elections. Opposition candidates are permitted in former USSR countries, but they are usually prevented from using broadcasting or the newspapers. This means that, in effect, the ruling president is never challenged. Elections which are fixed are sometimes called sham elections or show elections.[3][4][5][6][7][8]

Countries where the candidates are elected with a very high approval rating usually use elections to hide a more autocratic form of government. When Saddam Hussein was elected president of Iraq in 1995, he got 99.96% approval. There were about 8.4 million valid votes, 3,052 people voted against him.[9][10] 99.47% of all people allowed to vote did so (this is called voting turnout).[11] Another example: Kim Jong-un was elected the leader of North Korea, in 2014, with 100% of the vote.

Psephology is the study of elections.