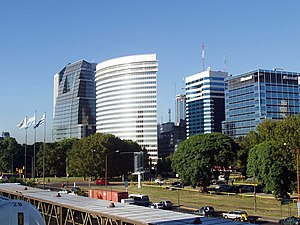 Buenos Aires is the capital and largest city in the South American country of Argentina. It has its own executive, legislative and judicial powers. It is in the central-eastern region of the country, on the southern shore of the Río de la Plata, in the Pampas region. The city was ceded in 1880 by the Province of Buenos Aires to be the federal capital of the country. It is the "main capital", along with 24 alternate capitals, because of the constitutional reform of 1994. Buenos Aires city is also known as Capital Federal to differentiate the city from the Buenos Aires Province. Until 1994 Buenos Aires city was under the presidential government, but after a constitutional reform in that year, the city became self-governed, allowing citizens to elect their city authorities.

3,040,000 people live in Buenos Aires. Spanish is the main language, but English is widely spoken and understood well. Italian is also widespread.

Buenos Aires has a humid subtropical climate (Köppen climate classification: Cfa). The average temperature is 17 °C. During the 20th century the temperature went up because of the urbanization. Rainfall is 1222.6 mm. per year. Summers are hot and humid. Winters are mild, the highest medium temperature is 13.7 °C during this season. Temperature rarely reaches 0 °C or below. Fog is frequent. Snow is extremely rare, and falls once or twice in a century.

Buenos Aires is divided into 48 neighborhoods. Most populated areas are:

Buenos Aires is the most visited city in South America.[7] The most touristic areas are the historical center, Palermo, Recoleta and San Telmo.

The fifth Wikimania was hosted in this city in 2009.