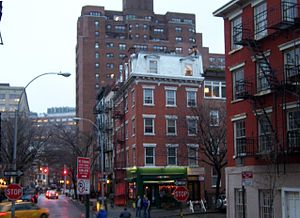 Greenwich Village is an area on the western part of southern/downtown Manhattan. It is sometimes called The Village. The Village is mainly residential.

Greenwich Village is bordered by Broadway to the east, Hudson River to the west, Houston Street to the south and 14th Street to the north. 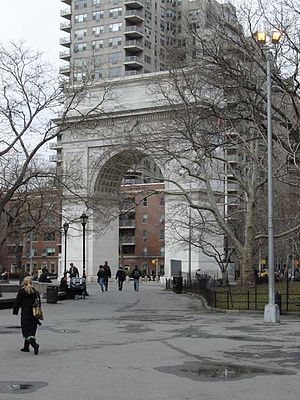 Originally, Greenwich Village was a hamlet separate to New York City. The grid plan for its streets is less orderly than in parts of Manhattan that were built later.

The village is located on what used to be marshland. In the 16th century, Native Americans called it Sapokanikan which means tobacco field. In the 1630s, it was turned into pasture by the Dutch, who called it Noortwyck. In 1664, when the English captured the Dutch settlement of New Amsterdam, and Greenwich Village developed as a hamlet.

In 1712, it officially became a village, and was named Grin'wich in the 1713 Common Council records. Following a yellow fever epidemic in 1822, many New York residents moved to the healthier air of Greenwich; where many stayed. In the 19th century, it was known as Washington Square.