The oldest part of the city, the island of Manhattan, still has its original Lenape Native American name. Although Native people such as the Lenape and Canarsees had lived there for many thousands of years, New York City was first explored by Europeans in the 1500s. Florentine explorer Giovanni da Verrazzano found the entrance to New York Harbor in the year 1524 and English explorer Henry Hudson named the Hudson River in 1609.

New York City was settled by Europeans from The Netherlands in 1624. The Dutch called the whole area of New York "Nieuw Nederland" (New Netherland) and they named a fort and town on the south end of Manhattan Island Nieuw Amsterdam (New Amsterdam),[13] after the capital city of the Netherlands, which was to become present-day New York. The English took over the colony in 1664 during the second Anglo-Dutch War. They changed the name to New York, to honor the Duke of York, who later became King James II of England. The Dutch surrendered Nieuw Amsterdam without fighting. They were afraid of the English Royal Navy, so they traded the town to England for the colony of Surinam in South America, which they thought was worth more money.

By the time the English took New York, there were many other Dutch towns in what would become New York City, including Breukelen (Brooklyn), Vlissingen (Flushing), and Nieuw Haarlem (Harlem). There were already some English towns in the area also, such as Gravesend in Brooklyn and Newtown in Queens. Dutch, English and other people had been living together in New York for a long time.

New York quickly grew to become a large and important port city. Important battles of the American Revolution were fought in northern Manhattan and in Brooklyn in 1776. New York was the capital of the United States under the Articles of Confederation from 1785 to 1788. When the US Constitution was made, it stayed as the capital from 1789 until 1790.[14]

In 1898, the cities of New York and Brooklyn came together with the Bronx, Staten Island, and the towns in Queens County to make Greater New York. This is the total area of the City of New York today. Around this time, many new immigrants came into New York City. They came in at Ellis Island, an island in New York's harbor near the Statue of Liberty. Many of them then moved to the Lower East Side neighborhood in Manhattan, which had over a million people living in just a few square miles. 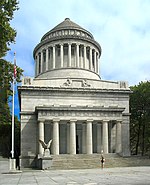 Most of New York City is on three islands near the Atlantic Ocean, although one part is on the mainland of North America. The city includes all of Manhattan Island and Staten Island, and the western end of Long Island. There are also many smaller islands.

The city is divided into five major parts called boroughs. Each one is also a county. They are:

The hallmark of New York city is its many skyscrapers, especially in Manhattan. In New York City there are about 5600 skyscrapers. 48 of them are over 200 metres tall, which is the highest number of skyscrapers in one area in the world.

New York City currently has over 8 million people. Over 18 million people live in the city and nearby areas. The majority of the people in New York City belong to ethnic groups that are minorities in the US. New York City has had large numbers of immigrants for centuries. In the early 19th Century, they came from Ireland and Germany. Later in the 19th century, they came from Italy, Russia and Eastern Europe. Today, many are from Puerto Rico, Haiti, the Dominican Republic and Colombia. 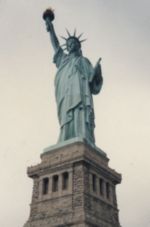 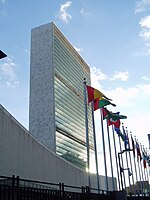 The United Nations Building in Manhattan

The mayor of New York is Bill de Blasio, a Democrat. The city also has a City Council that makes some local laws. Most laws in New York City are set by the state government in Albany.

Subway transportation is provided by the New York City Subway system, one of the biggest in the world.[16] Pennsylvania Station, the busiest train station in the United States, is here.[17]

John F. Kennedy International Airport, which is in the Queens neighborhood of New York, is one of the busiest airports in the United States.