In 1789, the Founding Fathers replaced the Articles with the United States Constitution and a federal form of government. 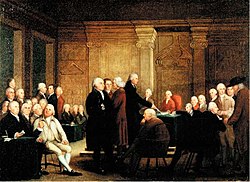 The Second Continental Congress wrote and passed the Articles of Confederation

Even though the Articles of Confederation and the Constitution were created by many of the same people, the two documents were very different. The original five-paged Articles contained thirteen articles, a conclusion, and a section for signatures. The following list contains short summaries of each of the thirteen articles.

(1) The name of the confederation will be "The United States of America."

(3) The United States is a group of states that has come together to protect each other and help each other. The states have united "for their common defense, the security of their liberties, and their mutual and general [well-being], [coming together] to assist each other, against all force offered to, or attacks made upon them...."

(4) People in the United States have freedom of movement: anyone can pass freely between states, except for "paupers, vagabonds, and fugitives from justice." When a person travels into one state, he gets all of the rights that state gives to people that live there. If a person commits a crime in one state and runs away to another state, and he is found, he will be extradited to the state where the crime happened, and tried there.

(6) Only the confederation government is allowed to conduct foreign policy (work with other countries) and to declare war. Without Congress's permission, no states may have navies or full-time armies, and no states may fight in any war. However, the Articles encouraged each state to have militias.

(7) When an army is raised for common defense, the state legislatures will choose Colonels and military ranks below Colonel. 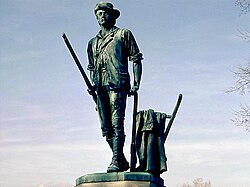 Statue of an American militia man. The Articles encouraged each state to have militias

(8) The United States will pay for things using money that the state legislatures will raise. Not every state will have to pay the same amount. States with higher property values will pay more.

(9) The confederation government has these powers: to declare war; to set weights and measures (including coins); and for Congress to serve as a final court for disagreements between states.

(10) A "Committee of the States" will be the government when Congress is not meeting.

(11) Nine states must agree before a new state is accepted into the Confederation. Canada is already approved, if it applies for membership.

(12) The Confederation accepts war debt from before the Articles.

(13) The Articles can only be changed if Congress and all of the state legislatures agree.

Congress of the Confederation

The Committee of the States was also created by the Articles of Confederation. It was also known as Council of State. It was meant to be the government when the Congress of the Confederation was not meeting. Each state had one member. The Committee had one meeting in 1784. Why was it so difficult for the United States government under the Articles of Confederation to respond to revolts like Shay's Rebellion? The National Government could not draft an Army and use federal troops to respond to riots and revolts