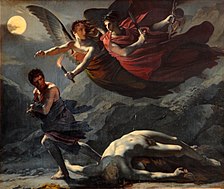 A crime (or misdemeanor or felony) is an act done by a person which is against the laws of a country or region. A person who does this is called a criminal.

When some criminals make money from crime, they try to stop the police finding out where the money came from by money laundering. Men and boys commit many more crimes than women and girls.[1]

The word crime is derived from the Latin root cernō, meaning "I decide, I give judgment". Originally the Latin word crīmen meant "charge" or "cry of distress." The Ancient Greek word κρίμα, krima, from which the Latin cognate derives, typically referred to an intellectual mistake or an offense against the community, rather than a private or moral wrong.[1]

In 13th century English crime meant "sinfulness", according to the Online Etymology Dictionary. It was probably brought to England as Old French crimne (12th century form of Modern French crime), from Latin crimen (in the genitive case: criminis). In Latin, crimen could have signified any one of the following: "charge, indictment, accusation; crime, fault, offense".

There are various levels of crimes. In some jurisdictions they are:

Different countries have different ideas of what things are crimes, and which ones are the worst. Some things that are crimes in one country are not crimes in other countries. Many countries get their ideas of what things are crimes from religions or controversial events which cause a law to be quickly created. For example, a religious Taboo might say eating a particular food is a crime. When automobiles became numerous, they killed or hurt many people in road accidents, so new laws were made for them.

In most countries, police try to stop crimes and to find criminals. When the police find someone who they think might be a criminal, they usually hold the person in a jail. Then, usually, a court or a judge decides if the person really did a crime. If the court or judge decides that the person really did it, then he or she might have to pay a fine or go to prison. Sometimes the judge might decide that the criminal should be executed (killed). This is called Capital punishment (or the Death Penalty). There are countries in the world that execute criminals, and others that do not.

In many countries, two conditions must exist for an act to be thought of as a crime:

Both must be present for the act to be thought of as a crime.