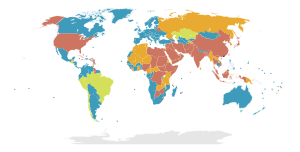 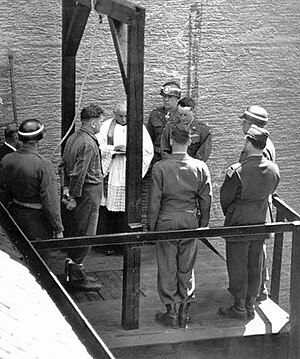 Execution of a war criminal in 1946

Death penalty, also called capital punishment, is when a government or state executes (kills) someone, usually but not always because they have committed a serious crime. A crime that can be punished with the death penalty is called a capital crime or a capital offense.

Executions in most countries have become rarer in recent centuries. The death penalty is a disputed and controversial topic.

Most of the countries that have a death penalty use it on murderers, and for other serious crimes such as rape or terrorism. Other countries especially ones with Authoritarian or Totalitarian governments, however, also use it for smaller crimes like theft, drugs, or for saying bad things about the government.

Which countries execute the most people?

A study by Amnesty International found that the following countries did the most executions in 2012: [2]

A total of 557 people were executed in the United States between 1977, when the death penalty was reintroduced after a 10-year break, and 2000. During this period, 20 states did not carry out any executions. Here are the states with the most executions during this time:

It is common to have people executed for crimes including murder, manslaughter and attempted murder, but there are also other crimes that carry the death penalty. Some of these are:

During war time, the following crimes are punished by death:

Who may not be executed

According to the International Covenant on Civil and Political Rights that became valid in 1976, people that were not at least eighteen years old at the time they committed the crime may not be executed. According to the European Convention on Human Rights, specifically its 13th amendment (2002), no one must be executed.

There is a lot of different opinions on the topic of capital punishment. As it is an important topic, each country has very strong feelings. Many people say the death penalty is reasonable because it scares people away from doing things that are illegal, however many others say there is a potential of executing an innocent man; one says justice, retribution, and punishment; the other side says that execution is murder. Most people know the threat of crime to their lives, but the question lies in the methods and action that should be used to deal with it.

Throughout human history, governments and rulers have used many death penalty methods to execute people, such as crucifixion, flaying, and hanging. Some methods like crucifixion and flaying are no longer used by governments, because people think that these methods of killing are too cruel. The gas chamber was found unconstitutional in the United States (that is: against the United States constitution not allowing "cruel and unusual punishments") and is no longer used.

The Council of Europe has abolished all death penalty by 13th amendment of the European Convention on Human Rights. Amnesty International oppose all death penalty on ground of the right to life and prohibition of all tortures or any cruel, inhuman, or degrading treatment insisted by Universal Declaration of Human Rights.

The following forms of execution are in use today: