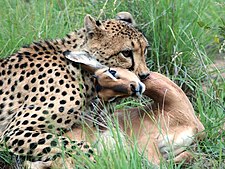 Stranglation is death by compressing the neck until the supply of oxygen is cut off. The process is called strangling.

Strangling is a technique in many combat sports and self-defence systems. It is a method of winning a judo bout. Usually the opponent submits; if not, he is "strangled out", that is, the hold is continued until he passes out and is then immediately released. Shime-waza, the judo term for this technique, has scored 97 times in World Judo events. No fatalities have resulted from it.[2] There have been some deaths of suspects in police custody, where officers have used a "choke hold". Investigation suggested that this was because the officers' training had not been so adequate as the training of top-class judo players.[2]

Strangling can be divided into three general types according to the mechanism used:[3]