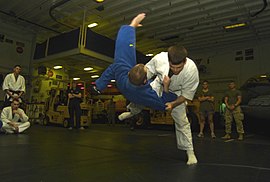 Judo is very scientific in its training methods and fighting techniques.[3]

Judo grew out of an older martial art, Jujutsu or Jū-jutsu.[4]

Jujutsu was an ancient and deadly martial art which used chokes, throws, joint locks, and strikes. Kanō created judo by using techniques which were common in jujutsu. He eliminated techniques that he thought were dangerous in training, so that students could train with resistance.Some basic throws are Tai-otoshi and De-ashi-barai (these are in Japanese). There are two types: groundwork and feet work. Ground work is when both players are on the ground. Usually the attacker would be on top and the uke (defender) would be on the bottom. In feet work both players would move along the mat in a variety of moves. Every once in a while a player will throw his/her opponent on the floor. In competitions the players will go full on for each other and once someone has thrown his/hers opponent down they need to hold them down for 20 seconds or the point won't count. The person who has the most points at the end wins a gold, silver or bronze.