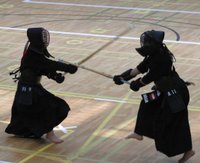 A martial art is any form of fighting and an art that has a set way of practice. There are many martial arts that come from certain countries. They are practiced for many reasons: fighting, self-defense, sport, self-expression, discipline, confidence, fitness, relaxing, meditation. A martial art is a style of combat, in many instances directed towards the self-defence. In the common usage, the word applies to the systems of combat developed in all the world.

One common method is particularly in the Asian martial arts, it is the form or kata. Martial arts may be used for self-defense, combat and fitness.

The idea of "martial art" appeared first time in English language in the 1920 Takenobu's Japanese-English Dictionary as a translation of the word bu-gei or bu-jutsu what means "art or solution of the military matters".

In simple words, the martial arts are fighting systems. There are many schools and styles of martial arts, but all share the same goal: the self-defence. Some of them, like taiji quan also can be used in order to improve health and the form as flowing of the qi.

Some martial arts were not born in Asia. For example, savate had appeared in France and the movements of sport of the capoeira came from the Brazil.

It is difficult to compare the effectiveness of the different existing arts. Recently, people developed competitions like the Ultimate Fighting Championship in the United States of America or Pancrase in Japan. That competitions also are known as "mixed martial arts" or MMA. Although that is yet to be seen the financial success or defeat of these ways.

The martial arts are defined in this method: through the history, to the soldier in the battlefield, the only thing that was important for them was beat the enemy that one have before himself. Whether a style is soft or hard or how many points are gained with a blow are details and subjects of discussion which appear in periods of peace, when there were hand to hand combats.

The martial arts are the arts of the war. If the main goal in a competition depends on noting points to somebody's advantage, then we are not before a martial art but before a sport.

The history of the martial arts is wide. The act of developing of the fighting systems dates from when the man had been able to cause to pass the knowledge, along with the strategies of war. Part of the most ancient written material on the subject dates from the 15th century in Europe and the authorship fall to famous masters, like Hans Talhoffer and George Silver. Also transcriptions of still more ancient texts had been brought to our days, one of them is a document written by hand. That document is called I.33 and dates from end of the 13th century.

The persons who train martial arts disagree with relation to the matter of the competitions. Some arts, like the boxing or the Thai boxing, give attending to the sparring -fights during training - and to taking part in competitions, yet the most common of aikido and krav maga reject the competitions. The reasons that cause these opinions are different. Many of the arts desiring to compete argue that the competitions give place to better and more efficient techniques. However, certain styles not desiring to compete claim that the rules with which people developed these competitions ruin the art and does not represent what can happen in a real situation.

In recent years, there have been tries to return to life some martial arts considered historical. Examples of this historical reconstruction of the martial arts are the pankration and the school of Shaolin that have not a continua tradition.

Martial arts of other lands