listen)), is a country in Southeast Asia. Its neighbours are Laos, Cambodia, Malaysia, and Myanmar. Its name was Siam until June 1939[9] and between 1945 and May 11 1949. The word Thai (ไทย) comes from the ethnic group in the center of Thailand.

Thailand is a constitutional monarchy. It has a King as a head of state, who is Vajiralongkorn at the moment.

Most people here (95%) follow the philosophy called Buddhism. Smaller number of people (4.4%), mostly to the south, follow Islam. Other religions in Thailand are Christianity, Hinduism, and Sikhism. Some Muslims in the south have begun fighting the government because they want to be more independent.

A Buddhist kingdom named Sukhothai was founded here in 1238.

A century later, a bigger kingdom named Ayuthaya appeared south of Sukhothai. Later Sukhothai became a part of Ayuthaya. Ayuthaya existed for more than 400 years before its fall by the attack of a Burmese kingdom.

A soldier of Chinese origin then founded a new capital city at Thonburi, and became King Tāksin.

The current era, Rattanakosin, started on founding Bangkok as the capital city by King Rama I of Chakri Dynasty.

Before 1932, Thailand was an absolute monarchy. On June 24, 1932, a group of people did a coup and changed Thailand to a constitutional monarchy. It was not until 1973 that Thai people voted for a Prime Minister in an election. There were coups both before and after this year.

In 1951, there was a failed coup - the Manhattan Rebellion.[10] On September 19, 2006, the army did a coup d'état and took control from Thaksin Shinawatra's government.

In May 2014, a new military coup d'état removed another government.

Thailand is made up of 76 provinces (จังหวัด, changwat), put into 5 groups. There are 2 specially governed districts: the capital Bangkok and Pattaya. The 76 provinces including Bangkok are as follows: 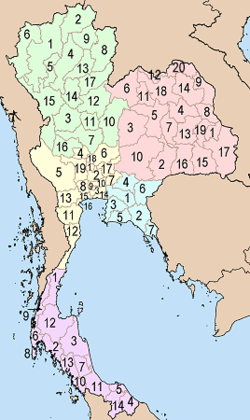 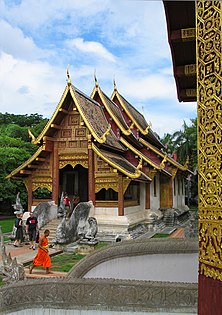