Claude Monet's painting of 19th century London smog. It was caused mainly by burning coal, fires.
Air pollution is a type of environmental pollution that affects the air and is usually caused by smoke or other harmful gases, mainly oxides of carbon, sulphur and nitrogen.

In other words, air pollution is the contamination of air due to the presence or introduction of a substance which has a poisonous effect.

Many of the world's large cities today have polluted air or low air quality.[1]

Even 2,000 years ago, the Romans were complaining about the polluted air in their cities. At that time, the air was thick with smoke from fires and the smell of sewers.[1] Air pollution has been classified as a danger to human health and Earth's many ecosystems for a long time. 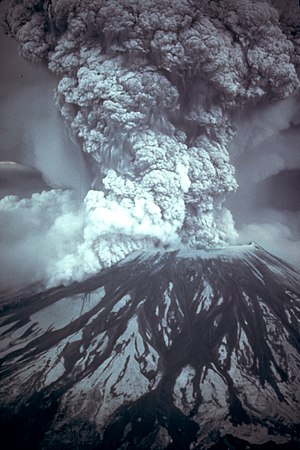 Ash from volcanic eruptions is an example of primary pollutants

There are many problems caused by air pollution, like greenhouse effect and acid rain

Farmlands and forests sometimes burn in wildfires producing soot (a black powder composed mainly of carbon, produced when coal, grasses, wood etc. is burned) from smoke. Soot can affect people and other life. People start many of those fires.

Many industrial power plants burn fossil fuels to get their energy. However, burning fossil fuels can make a lot of oxides (chemical compounds that have oxygen and other elements inside). In fact, the burning of fossil fuels makes 96% of the sulphur oxides in the atmosphere. Some industries also make chemicals that make poisonous fumes (smoke).

Air pollution is not only on the outside. Homes, schools, and buildings can also have air pollution. Sometimes the air inside a building is even worse than the air outside.[1] Many things which humans use every day can pollute the air. Compounds inside carpets, paints, building materials and furniture also pollute the air, especially when they are new.

In buildings where the windows are tightly shut to stop air leaks, the air inside can be polluted more than the air outside.[1]

Acid precipitation is precipitation, like rain, sleet, or snow, that contains acids from air pollution. When fossil fuels are burned, they let out oxides into the air. When these oxides mix with water in the atmosphere, they make acid, which fall as precipitation.[1] Acid precipitation can kill living things like fish and trees, by making the place where they live too acidic. Acid rain can also damage buildings made of limestone and concrete.

The World Health Organization said that 2.4 million people died because of the direct problems of air pollution.[3][4] Some of the problems include:[1]

In India in 2014, it was reported that air pollution had cut crop yields in the most affected areas by almost half in 2010 when compared to 1980 levels. There can also be increased yield of crops due to some air quality conditions.