Carbon is a very important chemical element, with a chemical symbol of C. All known life on Earth needs it. Carbon has atomic mass 12 and atomic number 6. It is a nonmetal, meaning that it is not a metal.

When iron is alloyed with carbon, hard steel is formed. Carbon in the form of coal is an important fuel.

A whole type of chemistry, called organic chemistry, is about carbon and its compounds. Carbon makes many types of compounds. Hydrocarbons are molecules with carbon and hydrogen. Methane, Propane, and many other fuels are hydrocarbons. Many of the substances that people use daily are organic compounds.

Carbon, hydrogen, nitrogen, oxygen, and some other elements like sulfur and phosphorus together form most life on earth (see List of biologically important elements). Carbon forms a very large number of organic compounds because it can form strong bonds with itself and with other elements. Because of the amounts of carbon living things have, all organic things are considered "carbon-based".

Each carbon atom usually forms four chemical bonds, which are strong connections to other atoms to form molecules. The kind of bond that carbon makes is called a covalent bond. These bonds allow carbon to form many kinds of small and large molecules. A molecule of methane is the smallest; it has four hydrogen atoms bonded to carbon. The bonds can be double bonds, meaning that two bonds form between carbon and another atom to make a stronger connection. For example, carbon dioxide has two oxygen atoms, and each one is double bonded to carbon. Carbon can even form three bonds with another atom, called a triple bond. For example, in the gas acetylene carbon forms a triple bond with another carbon atom.

By bonding to other carbon atoms, carbon can form long chain-shaped molecules, called polymers, such as plastics and proteins. Atoms of other elements can be part of the long polymer chains, often nitrogen or oxygen.

The name of carbon comes from Latin carbo, meaning charcoal. In many foreign languages the words for carbon, coal and charcoal are synonyms.

Carbon in nature is found in three forms called allotropes: diamond, graphite, and fullerenes. Graphite, with clay, is in pencils. It is very soft. The carbon atoms in it make rings, which are on top of each other and slide very easily. Diamonds are the hardest natural mineral. Fullerenes are a "soccer ball" shape of carbon. They are mostly of interest to science. A special, man-made, tube-shaped allotrope of carbon is the carbon nanotube. Carbon nanotubes are very hard, so they might be used in armor. Nanotubes might be useful in nanotechnology.

There are 10 million known carbon compounds. 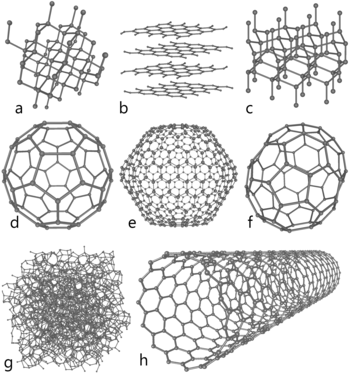 A radioactive isotope of carbon, carbon-14, can be used to figure out how old some objects are or when something died. As long as something is on the surface of the earth and taking in carbon, the amount of carbon-14 stays the same. When an object stops taking in carbon, the carbon-14 amount goes down. Because the half-life (how long it takes for half of a radioactive isotope to go away) of carbon-14 is 5730 years,[16] scientists can see how old the object is by how much carbon-14 is left.

Carbon is in many places in the universe. It was first made in old stars. Carbon is the fourth most common element in the sun.[16] The atmospheres of Venus and Mars are mostly carbon dioxide.[17]

Carbon is important to the human body and other living things, and it is the second most common element in the human body, at 23% of all body weight.[16] It is also a key part of many biological molecules (molecules used in life).

Most of the carbon on Earth is coal. Graphite is in many (typically desert) areas, including Sri Lanka, Madagascar, and Russia. Diamonds are rare and are found largely in Africa. Carbon is also in some meteorites.