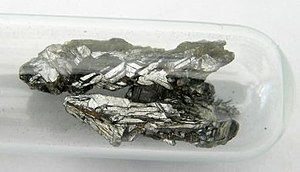 Arsenic is found in three allotropes. Gray arsenic is the most common. It is a brittle, somewhat soft metalloid that is a little shiny. It has a density of 5.73g/cm3. It is a semiconductor. Yellow arsenic is unstable and rare. It is the most toxic allotrope. It is a soft and waxy nonmetal, similar to white phosphorus. It turns into gray arsenic in light. Its density is 1.97g/cm3, much lighter than gray arsenic. It is created when arsenic vapor (made by heating arsenic very hot) is cooled very fast by something like liquid nitrogen. Black arsenic is similar to red phosphorus. It is a brittle, black, and shiny nonmetal. It does not conduct electricity. Since gray arsenic is the most common, it is usually referred to as arsenic.

Arsenic is found as one stable (nonradioactive) isotope, 75As. There are about 33 radioactive isotopes found. The longest lasting one is 73As, which has a half life of about 80 days.

Arsenic burning in the air 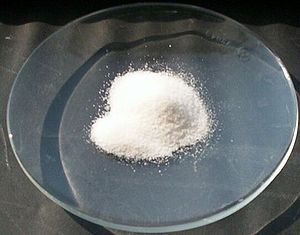 Arsenic forms chemical compounds in three oxidation states: -3, +3, and +5. -3 compounds are reducing agents. They are the main form of arsenic in the ground (as arsenides). Arsine is a colorless, highly toxic gas with a garlic odor. The +3 state is the most common. They are weak oxidizing agents. Arsenic trioxide is a white solid. It dissolves in water to make a solution of arsenious acid. The arsenic trichlorides are low melting covalent solids. The +5 state is common, too. They are strong oxidizing agents. Arsenic pentafluoride, a colorless and highly reactive gas, is the only stable arsenic pentahalide. Arsenic pentoxide dissolves in water to make arsenic acid, which can make arsenate salts.

-3 compounds are reducing agents. They are found as arsenides and arsine. The metal arsenides have properties between an alloy and a salt.

+3 compounds are weak oxidizing agents. Many are colorless, although some are orange.

Arsenites are salts of arsenious acid.

Arsenates are salts of arsenic acid.

Arsenic is found as a less toxic variety in fish and mushrooms. Some people think that humans need very small amounts of arsenic to be healthy. Some bacteria can use arsenic instead of phosphorus for some things; they are called arsenic bacteria.

Most arsenic is made from the waste products after other metals are processed. Only China actually mines arsenic.

Arsenic was known since antiquity. It was alloyed with bronze to make the bronze harder. Some people used arsenic as make-up, although it was toxic. Arsenic was well known as a poison. Since people used it to kill royalty and it was hard to detect, it was called the "Poison of Kings" and the "King of Poisons". An arsenic compound could have been the first organometallic compound (a metal bonded to an organic compound).

Arsenic compounds were used as a preservative for wood. Once people saw how toxic arsenic was, they stopped using it to preserve wood. Some feed for animals had arsenic in it to prevent disease. Lead arsenate was used as an insecticide in orchards but damaged the brains of those who put the insecticide on the trees.

Arsenic as an element is used in alloys. The lead in lead acid batteries has some arsenic in it to make it stronger. Some semiconductors have arsenic in them.

Copper arsenate was used as a coloring for sweets. Paris green, a green pigment having arsenic in it, made many people sick. Some bullets have arsenic in them. Arsenic is sometimes added to brass to prevent the zinc from coming out. Arsenic was used in optical glass but was taken out because it was toxic.

Arsenic and its compounds are highly toxic. They are carcinogens. Water near arsenic mines is normally contaminated with arsenic. Wood that was preserved with arsenic compounds can leach arsenic into the soil. Emissions from coke ovens have arsenic in them.